Auckland Art Gallery Toi o Tāmaki is the principal public gallery in Auckland, New Zealand, and has the most extensive collection of national and international art in New Zealand. It frequently hosts travelling international exhibitions.

Set below the hilltop Albert Park in the central-city area of Auckland, the gallery was established in 1888 as the first permanent art gallery in New Zealand.

The building originally housed the Auckland Art Gallery as well as the Auckland public library opening with collections donated by benefactors Governor Sir George Grey and James Tannock Mackelvie. This was the second public art gallery in New Zealand opened three years after the Dunedin Public Art Gallery in 1884. Wellington's New Zealand Academy of Fine Arts opened in 1892 and a Wellington Public Library in 1893.

In 2009, it was announced that the museum received a donation from American businessman Julian Robertson, valued at over $100 million, the largest ever of its kind in the region. The works will be received from the owner's estate.[1]

Throughout the 1870s many people in Auckland felt the city needed a municipal art collection but the newly established Auckland City Council was unwilling to commit funds to such a project. Following pressure by such eminent people as Sir Maurice O'Rorke (Speaker of the House of Representatives) and others, the building of a combined Art Gallery & Library was made necessary by the promise of significant bequests from two major benefactors; former colonial governor Sir George Grey, and James Tannock Mackelvie. Grey had promised books for a municipal library as early as 1872 and eventually donated large numbers of manuscripts, rare books and paintings from his collection to the Auckland Gallery & Library [in all over 12,500 items, including 53 paintings]. He also gave material to Cape Town, where he had also been governor. The Grey bequest includes works by Caspar Netscher, Henry Fuseli, William Blake and David Wilkie.

Mackelvie was a businessman who had retained an interest in Auckland affairs after returning to Britain. In the early 1880s he announced a gift of 105 framed watercolours, oil paintings, and a collection of drawings. His gift eventually amounted to 140 items, including paintings, decorative arts, ceramics and furniture from his London residence, these form the core of the Mackelvie Trust Collection which is shared between the Auckland City Art Gallery, the Public Library and the Auckland Museum. Mackelvie's will stipulated a separate gallery to display his bequest, this was not popular with the city authorities but a special room was dedicated to the collection in 1893 and eventually the top lit Mackelvie Gallery was built in 1916. The Mackelvie Trust continues to purchase art works to add to the collection which now includes significant 20th-century bronzes by Archipenko, Bourdelle, Epstein, Moore and Elisabeth Frink. 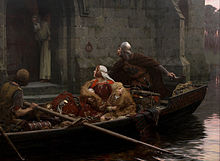 With the extension added on in the 1970s, seen from a nearby parking building.

The Auckland Gallery collection was initially dominated by European old master paintings following the standard taste of the 19th century. Today the collection has expanded to include a wider variety of periods, styles and media, and numbers over 15,000 artworks.[2] Many New Zealand and Pacific artists are represented, as well as Europe and material from the Middle Ages to the present day. Notable New Zealand artists with extensive representation include Gretchen Albrecht, Marti Friedlander, C.F. Goldie, Alfred Henry O'Keeffe, Frances Hodgkins, Gottfried Lindauer and Colin McCahon. Some of these works were donated by the artists themselves.

In 1915 a collection of paintings of Māori by Gottfried Lindauer was donated to the Gallery by Henry Partridge, an Auckland businessman. He made the gift on the proviso that the people of Auckland raise 10,000 pounds for the Belgium Relief Fund. The money was raised within a few weeks.

Another major benefactor was Lucy Carrington Wertheim. Miss Wertheim was an art gallery owner in London and through her support of expatriate artist Frances Hodgkins bestowed on the Auckland Art Gallery a representative collection of British paintings from the interwar period. Her gifts in 1948 and 1950 totalled 154 works by modern British artists, including Christopher Wood, Frances Hodgkins, Phelan Gibb, R. O. Dunlop and Alfred Wallis. The Wertheim collection was initially displayed in a separate room opened by the Mayor J. A. C. Allum on 2 December 1948.

In 1953 Rex Nan Kivell donated an important collection of prints, including work by George French Angas, Sydney Parkinson, Nicholas Chevalier, and Augustus Earle. The 1960s saw the arrival of the Watson Bequest, a collection of European medieval art. In 1967 the Spencer collection of early English and New Zealand watercolours was donated, this included early New Zealand views by John Gully, John Hoyt, and John Kinder. In 1982 on the death of Dr Walter Auburn, print collector and valued adviser to the Gallery's prints and drawings department, the Mackelvie Trust received his magnificent collection of over one and a half thousand prints, including work by Callot, Piranesi, della Bella and Hollar.

In 1952 Eric Westbrook was appointed as the first full-time director of the Art Gallery (previously the Head Librarian was formally in charge of both the Gallery and Library). He was succeeded in 1955 by Peter Tomory who stayed until 1965. Both men sought to revitalise the Gallery and introduce modern art to a largely conservative public in the face of resistance from a largely hostile City Council. The 1956 Spring Exhibition 'Object and Image' showed works by modern artists such as John Weeks, Louise Henderson, Milan Mrkusich, Colin McCahon, Kase Jackson and Ross Fraser. Other controversial exhibitions, including Henry Moore and Barbara Hepworth, resulted in serious confrontation between the Council and Tomory, resulting in his resignation.

Tomory's intended purchase of Hepworth's Torso II in 1963 (likened by one councillor to 'the buttock of a dead cow') changed the climate of art and culture in New Zealand. Even the conservative NZ Herald pointed out to its readers, "It is no function of an Art Gallery to be stuffed with exhibits which everyone can comprehend." The bronze statue was privately bought by local businessman George Wooler and anonymously donated to the Gallery.

In 1988, Christopher Johnstone succeeded Rodney Wilson as director. During his 8 years as director major exhibitions included Pablo Picasso: The artist before nature (1989), Rembrandt to Renoir, which attracted a record attendance for an exhibition charge exhibition of 210,000 (1993) and, in 1995, a programme marking the centennial of the artist's visit to the gallery, including the exhibition Paul Gauguin: Pages from the Pacific and a major book: Gauguin and Maori Art. Other achievements during his incumbency were the funding and development of the New Gallery for contemporary art, which opened in 1995, the establishment of Haerewa, the Maori Advisory Group and a significant range of acquisitions for the collection and the Mackelvie Trust including works by including works by Vanessa Bell, John Nash, John Tunnard, Anish Kapoor, Jesus Rafael Soto and Ed Ruscha.

In 2009, it was announced that American investor Julian Robertson would donate art valued at $115 million to the Auckland Art Gallery. The donation included works by Paul Cezanne, Paul Gauguin, Pablo Picasso, Henri Matisse, Piet Mondrian, Salvador Dali, Georges Braque, Andre Derain, Fernand Leger, Pierre Bonnard and Henri Fantin-Latour and was the largest of its kind in Australasia.[1] Following the donation, the Kitchener Street rooms were named the Julian and Josie Robertson Galleries.[1]

On 4 April 2012, it was announced that the Auckland Art Gallery would join the Google Art project. 'It is a fantastic opportunity to share with the rest of the world some of the best of our New Zealand and international collection,' said RFA Gallery Director Chris Saines.[3] 'People can learn about and enjoy New Zealand art up close even when they are on the other side of the planet.' Auckland Art Gallery has contributed 85 artworks to the project: 56 are from its New Zealand Pacific collection and 29 by international artists. The Gallery's two Senior Curators, Ron Brownson (New Zealand and Pacific Art) and Mary Kisler (Mackelvie Collection, International Art), selected the works. Examples of New Zealand art now available via Google Art Project include Colin McCahon's On Building Bridges (1952) and paintings by Dunedin-born Frances Hodgkins.

The modern extension completed in 2011.

The main gallery building was originally designed by Melbourne architects Grainger & D'Ebro to house not only the art gallery but also the City Council offices, lecture theatre and public library. It is constructed of brick and plaster in an early French Renaissance style and was completed in 1887, with an extension built in 1916.[4] It is three storeys high, with an attic in the steep pitched roofs, and a six-storey clock tower. The building was registered as a Category I heritage item by Heritage New Zealand on 24 November 1983, listed with registration number 92.[5]

The new building eventually proved too small to house all the Council departments and overflow space in the Customs House in Customs Street was found to be necessary. Following the completion of the Auckland Town Hall in 1911 all Council departments left the Gallery building allowing expansion of Gallery facilities, including extra workshop space for art classes. Several artists maintained studio space in the complex during the period just after the war; the weaver Ilse von Randow utilised the clock tower rooms and created onsite the Art Gallery Ceremonial curtains, executed as part of the 1950s modernisation. In 1969 the art classes and studios were relocated to Ponsonby where a decommissioned Police Station by John Campbell at 1 Ponsonby Road was relaunched as 'Artstation' which continues the gallery outreach programmes.

From 1969 to 1971 the building underwent remodelling and a new wing and sculpture garden were added. This was the result of the lavish Philip Edmiston bequest which had been announced in 1946, which had stipulated the building of a new gallery. In 1971 the Public library was moved to the new Auckland Public Library building by Ewen Wainscott in nearby Lorne Street.[citation needed]

In the late 2000s, a major extension was mooted, which caused substantial criticism from some quarters due to its cost, design and the fact that land from Albert Park would be required for the extension. In late 2007, the Gallery closed for extensive renovations, and re-opened on 3 September 2011. During this time of closure, temporary exhibitions were held at the NEW Gallery on the corner of Wellesley and Lorne Streets. The new renovation and expansion of the Gallery creates at least 50 per cent additional display space. In 2008, Council decided to go ahead with the extension, which finished in 2011 for a total of NZ$113 million, of which Auckland City Council contributed just under NZ$50 million.

The expansion design by Australian architecture firm FJMT in partnership with Auckland-based Archimedia,[6] increased exhibition space by 50%, for up to 900 artworks,[4] and provided dedicated education, child and family spaces.[7] As part of the upgrade, existing parts of the structure were renovated and restored to its 1916 state - amongst other things ensuring that the 17 different floor levels in the building were reduced to just 6.[4] The redevelopment has to date received 17 architectural and 6 design-related awards,[8] including the World Architecture Festival's 2013 World Building of the Year.[9]

One of the sealed entrances to the Albert Park tunnels can be found behind the Art Gallery on Wellesley Street.[4]

Although founded in 1888, the Gallery did not employ a professional director until the appointment of Englishman Eric Westbrook in 1952.[10]

Retrieved from "http://en.turkcewiki.org/w/index.php?title=Auckland_Art_Gallery_Toi_o_Tāmaki&oldid=970489509"
This website is a mirror of Wikipedia, and is not affiliated with the Wikimedia Foundation.
Categories:
Hidden categories: