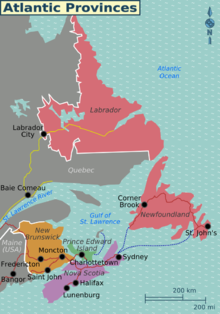 Atlantic Canadian English is a class of Canadian English dialects spoken in the Atlantic provinces of Canada and is notably distinct from Standard Canadian English.[1] It is composed of Maritime English (aka Maritimer English, described in this article) and Newfoundland English. It is mostly influenced by British and Irish English, Irish and Scottish Gaelic, and some Acadian French. Atlantic Canada is the easternmost region of Canada, comprising four provinces located on the Atlantic coast – the three Maritime provinces: Nova Scotia, New Brunswick, and Prince Edward Island, as well as Newfoundland and Labrador.[2] The population of the Atlantic Provinces in 2016 was about 2,300,000 on a land area of approximately half a million square kilometres,[2] with Nova Scotia being the most populous province, and its capital, Halifax, the most populous city. Regions such as Miramichi and Cape Breton have a wide variety of phrases and words not spoken outside of their respected regions.

Canadian English owes its very existence to important historical events, especially the Treaty of Paris of 1763. English was first spoken in Canada in the 17th century, in seasonal fishing communities along the Atlantic coast, including the island of Newfoundland, and at fur trade posts around Hudson Bay.[2] Treated as a marker of upper-class prestige in the 19th century and the early part of the 20th, Canadian dainty was marked by the use of some features of British English pronunciation, resulting in an accent similar to the Trans-Atlantic accent known in the United States. Students in school were not permitted to use Gaelic, upon threat of punishment for not using the King's English, and thus Gaelic fell into disuse. This accent faded in prominence following World War II, when it became stigmatized as pretentious, and is now almost never heard in contemporary Canadian life outside of archival recordings used in film, television or radio documentaries.[citation needed]

The Atlas of North American English (2006) revealed many of the sound changes active within Atlantic Canadian English, including the fronting of /ɑːr/ and full Canadian raising. This means the diphthongs /aɪ/ and /aʊ/ are raised to, respectively, [ʌɪ] and [ʌʊ] before voiceless consonants like /p/, /t/, /k/, /s/, /f/. In all Atlantic Canadian English, /æ/ (the "short a sound") is raised before nasal consonants. This is strongly true in Nova Scotia's Sydney English specifically, which also features a merger of /æɡ/ and /eɪɡ/ (e.g. making haggle sound like Hagel).[3] This merger, typical of Standard Canadian English as well, is not typical however of the rest of Atlantic Canadian English. Nova's Scotia's Halifax English and New Brunswick's Saint John English show /æ/ raising before a few consonants, somewhat reminiscent of a New York accent, though nowhere near as defined (thus, bad has a different vowel sound than bat and back),[4] though Charles Boberg suspects this is an older, recessive feature.[5] Nova Scotia's Lunenburg English may show non-rhotic behaviour.[2] An influence of Irish and Scottish English features is noticeable in Newfoundland English, including a fronting of /ɑː/~/ɒ/,[6] the cheer–chair merger, the line–loin merger, and a distinct lack of the marry–merry merger.[7] Nova Scotia English generally has a conservative /uː/ compared with other Canadian English.[8]

The flapping of intervocalic /t/ and /d/ to an alveolar tap [ɾ] between vowels, as well as pronouncing it as a glottal stop [ʔ], is less common in the Maritimes than elsewhere in Canada, so that "battery" is pronounced [ˈbætɹi] instead of with a glottal stop. The varied, but similar, Maritimer accents are influenced by an overwhelming majority of early Scottish and Irish immigration namely in the regions of Saint John, Miramichi, Cape Breton and parts of Halifax.

The phonology of Maritimer English has some unique features: 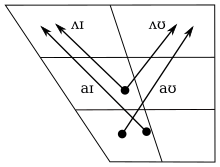 Since Canadian raising occurs only before the voiceless consonants /p/, /k/, /f/, /t/, /θ/, /s/, Canadian English distinguishes the raised and unraised vowels in word pairs like "write" and "ride" or "lout" and "loud."

The interrogative "right?" is raised to [ˈrʌɪt] and is also used as an adverb, as in "It was right foggy today!" That sense may be influenced by Welsh word "reit" [ˈrəɪt],[2] which means "very, rather, or considerably." "Right" is often but less today than before[when?] used with that meaning in the American South, too. "Some" is used as an adverb as well, especially in Nova Scotia, as in "This cake is some good!" Another example is "s'pose" or "s'poseda" for "suppose" or "supposed to." Such expressions tend to be widely used in the rural Maritimes but are less common in urban areas.

Common in New Brunswick, Prince Edward Island and Nova Scotia, but also found in downeast Maine, is aspirated speech; i.e., "Yeah" or "No", spoken while inhaling (colloquial pronunciation). This speech pattern bears no particular significance, other than its unusual nature. Competitive aspirated speech has been observed, with the intensity of aspiration increasing as conversation passes from one person to the next. The speaker is generally unaware of using this technique, and will frequently deny using it, when confronted. This is often referred to as a "Gaelic Gasp".[2]

Individual words and dialects may vary between provinces, and indeed, will vary between towns. On Prince Edward Island or Nova Scotia, "mouth" may be pronounced "mewth". In Newfoundland, "Mouth" may be pronounced as "Mout". Either province may also pronounce "Look" as simply "Luh", but only if the word was not used as part of a bigger sentence, such as pointing in a direction and saying "luh!", otherwise the letter "k" is pronounced, "Look here!". The phrase (for eating) "get it into you" is spoken quickly and almost as one word, "giggit-inta-ya". The phrase "Go away with you" (a phrase of disbelief) would be pronounced "go-way-with-ya" or "go-wee-witch-ya" spoken quickly as if all of one word. Having a big meal may be called "having a big feed" or "having a big scoff". Slang terms that would otherwise be considered insults in other parts of Canada are almost terms of endearment within Atlantic Canada.

Terms of British origin are very much still a part of Maritime English, depending on dialects. Chesterfield, front room, gob, and parlour are examples of this. Another is the use of the somewhat vulgar "arse" in place of the American and central and western Canadian form, "ass". Other examples of British terms that may be heard in the rest of Canada, but less frequently than in the Maritimes, include "holiday" for vacation, "sweets" for candy, "Mum" for Mom and "cellar" for basement. Prince Edward Islanders often use more British terms than any other Maritimers, due to the overwhelming homogeneity of the province's Scottish and Irish ethnicity.[2] Examples include referring to the hood of a car as an "engine bonnet" and a barn as a "byre". The latter is much more common amongst older speakers. The arse end of a car may also be referred to as the "boot". "Go to the arse end of the car, lift the bonnet, and check inside the boot. Luh! I found the tire iron! Right where it's s'poseda be!". Going for a "ramble" would refer to going for a long walk for pleasure.

Truancy is often referred to as playing hookey, skipping, ditching, or jigging. Some Maritimers, particularly Prince Edward Islanders, will describe treacherous winter roads as "slippy" rather than "slippery". Some Maritimers will also add an /s/ to the end of "somewhere" and "anywhere", producing "somewheres" and "anywheres".[2]

The names of meals are not always used in the same way as in other parts of the country: "dinner" may refer to the meal eaten at midday; "supper" is the evening meal; and occasionally, particularly with older speakers, "lunch" refers to a snack eaten outside of regular meal times (for example, a "bed lunch" is a bedtime snack). "Breakfast" is used for the morning meal, as it is elsewhere in Canada.

Many terms and phrases that are derived from the region's nautical background and are often shared with Britain, Ireland and New England. Examples of this include terms such as "reef" in place of "pull" and a deckhand on a boat being referred to as a "cork". A common way to describe drunkenness is to state that someone is "three sheets to the wind", which is a phrase used to describe a ship swaying in the wind due to loose sheets (ropes) in the rigging. A "jigger" can refer to any object, "I can't change the TV channel without the jigger!" The phrase "I like the cut of your jib" (a jib is a forward sail which cuts or draws into the wind) means to understand or agree what someone is talking about in a conversation, or to approve of ones actions. It is not uncommon to hear one use the word "downstream" to refer to any location being a distance or direction to head to; such as "Im heading downstream into town". The word "Landed" (a boat landing on shore) can refer to arriving at a location by any means; "I landed at my neighbour's house last night".

Some speakers make liberal use of profanity, with varying degrees of creativity. A couple of commonly heard phrases elsewhere unused are "Jeezlus" and "un-fuckin-real". In jest, friends will often inquire to their peers as to whether or not they "are fucked", usually when chirping. Profanity is commonly used to indicated the intensity of an opinion; many Maritime English speakers would be quick to understand that the sentence "Some jeezlus hot, wha?" means "It is currently very hot outside". In common with Australian and New Zealand English, Atlantic Canadians use the term "sook" (pronounced like "book") to mean a cry-baby or whinger.

Retrieved from "http://en.turkcewiki.org/w/index.php?title=Atlantic_Canadian_English&oldid=960253167"
This website is a mirror of Wikipedia, and is not affiliated with the Wikimedia Foundation.
Categories:
Hidden categories: