An asterisk (*); from Late Latin asteriscus, from Ancient Greek ἀστερίσκος, asteriskos, "little star",[1][2] is a typographical symbol or glyph. It is so called because it resembles a conventional image of a star.

Computer scientists and mathematicians often vocalize it as star (as, for example, in the A* search algorithm or C*-algebra). In English, an asterisk is usually five-pointed in sans-serif typefaces, six-pointed in serif typefaces,[3] and six- or eight-pointed when handwritten. It is often used to censor offensive words, and on the Internet, to indicate a correction to a previous message.

In computer science, the asterisk is commonly used as a wildcard character, or to denote pointers, repetition, or multiplication.

The asteriskos used in an early Greek papyrus.

Early asterisks seen in the margin of Greek papyrus.

The asterisk has already been used as a symbol in ice age cave paintings.[4] There is also a two thousand year old character used by Aristarchus of Samothrace called the asteriskos, ※, which he used when proofreading Homeric poetry to mark lines that were duplicated.[5] Origen is known to have also used the asteriskos to mark missing Hebrew lines from his Hexapla.[6] The asterisk evolved in shape over time, but its meaning as a symbol used to correct defects remained.

In the Middle Ages, the asterisk was used to emphasize a particular part of text, often linking those parts of the text to a marginal comment.[7] However, an asterisk was not always used.

One hypothesis to the origin of the asterisk is that it stems from the five thousand year old Sumerian character dingir, 𒀭,[8] though this hypothesis seems to only be based on visual appearance.[9]

When toning down expletives, asterisks are often used to replace letters. For example, the word "fuck" might become "f**k", "f*ck" or even "****".[10] Vowels tend to be censored with an asterisk more than consonants, but the intelligibility of censored profanities with multiple syllables such as "b*ll*cks" (bollocks) or uncommon ones is higher if put in context with surrounding text.[11]

In colloquial usage, an asterisk is used to indicate that a record is somehow tainted by circumstances, which are putatively explained in a footnote referenced by the asterisk.[12]

The usage of the term in sports arose during the 1961 baseball season in which Roger Maris of the New York Yankees was threatening to break Babe Ruth's 34-year-old single-season home run record. Ruth had amassed 60 home runs in a season with only 154 games, but Maris was playing the first season in the American League's newly expanded 162-game season. Baseball Commissioner Ford Frick, a friend of Ruth's during the legendary slugger's lifetime, held a press conference to announce his "ruling" that should Maris take longer than 154 games both records would be acknowledged by Major League Baseball, but that some "distinctive mark" [his term][13] be placed next to Maris', which should be listed alongside Ruth's achievement in the "record books". The asterisk as such a mark was suggested at that time by New York Daily News sportswriter Dick Young, not Frick.[13] The reality, however, was that MLB actually had no direct control over any record books until many years later, and it all was merely a suggestion on Frick's part. Within a few years the controversy died down and all prominent baseball record keepers listed Maris as the single-season record holder.[13]

Nevertheless the stigma of holding a tainted record remained with Maris for many years, and the concept of a real or figurative asterisk denoting less-than-accepted "official" records has become widely used in sports and other competitive endeavors. A 2001 TV movie about Maris's record-breaking season was called 61* (pronounced sixty-one asterisk) in reference to the controversy.

Uproar over the integrity of baseball records and whether or not qualifications should be added to them arose again in the late 1990s, when a steroid-fueled power explosion led to the shattering of Maris' record. Even though it was obvious - and later admitted[14] - by Bunyonesque Mark McGwire that he was heavily juiced on steroids when he hit 70 homers in 1998, baseball did nothing...to the annoyance of many fans and sportswriters. Three years later evident steroid-user Barry Bonds pushed that record out to 73, and fans once again began to call for an asterisk in the sport's record books.

Fans were especially critical and clamored louder for baseball to act during the 2007 season, as Bonds approached and later broke Hank Aaron's career home run record of 755.[15] Antagonized fans would often hold up signs bearing asterisks whenever Bonds came up to bat. After Bonds hit his record-breaking 756th home run that season, a fashion designer and entrepreneur purchased the home run ball from the fan who caught it, and ran a poll on his website to determine its fate. He subsequently donated the ball, marked with a die-cut asterisk, to the Baseball Hall of Fame.

Many programming languages and calculators use the asterisk as a symbol for multiplication. It also has a number of special meanings in specific languages, for instance:

In the B programming language and languages that borrow syntax from it, such as C, PHP, Java, or C#, comments in the source code (for information to people, ignored by the compiler) are marked by an asterisk combined with the slash:

Some Pascal-like programming languages, for example, Object Pascal, Modula-2, Modula-3, and Oberon, as well as several other languages including ML, Wolfram Language (Mathematica), AppleScript, OCaml, Standard ML, and Maple, use an asterisk combined with a parenthesis:

CSS, while not a programming language, also uses the slash-star comment format.

Each computing language has its own way of handling comments; "/* ... */" and similar notations are not universal.

In fluid mechanics an asterisk in superscript is sometimes used to mean a property at sonic speed.[20]

In linguistics, an asterisk is placed before a word or phrase to indicate that it is not used, or there are no records of it being in use. This is used in several ways depending on what is being discussed.

In historical linguistics, the asterisk marks words or phrases that are not directly recorded in texts or other media, and that are therefore reconstructed on the basis of other linguistic material (see also comparative method).

In the following example, the Proto-Germanic word *ainlif is a reconstructed form.

A double asterisk indicates a form that would be expected according to a rule, but is not actually found. That is, it indicates a reconstructed form that is not found or used, and in place of which another form is found in actual usage:

In most areas of linguistics, but especially in syntax, an asterisk in front of a word or phrase indicates that the word or phrase is not used because it is ungrammatical.

Since a word marked with an asterisk could mean either "unattested" or "impossible", it is important in some contexts to distinguish these meanings. In general, authors retain asterisks for "unattested", and prefix ˣ, **, †, or a superscript "?" for the latter meaning.[citation needed] An alternative is to append the asterisk (or another symbol, possibly to differentiate between even more cases) at the end.[citation needed]

In optimality theory, asterisks are used as "violation marks" in tableau cells to denote a violation of a constraint by an output form.[22]

In the early days of the International Phonetic Alphabet, an asterisk was sometimes used to denote that the word it preceded was a proper noun.[23] See this example from W. Perrett's 1921 transcription of Gottfried Keller's "Das Fähnlein der sieben Aufrechten":[24]

The asterisk has many uses in mathematics. The following list highlights some common uses and is not exhaustive.

as a unary operator, denoted in prefix notation

as a unary operator, written as a subscript

as a unary operator, written as a superscript

as a binary operator, in infix notation

The asterisk is used in all branches of mathematics to designate a correspondence between two quantities denoted by the same letter – one with the asterisk and one without.

In fine mathematical typography, the Unicode character U+2217 ∗ ASTERISK OPERATOR (in HTML, &lowast;) is available. This character also appeared in the position of the regular asterisk in the PostScript symbol character set in the Symbol font included with Windows and Macintosh operating systems and with many printers. It should be used in fine typography for a large asterisk that lines up with the other mathematical operators. 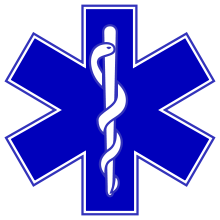 The Star of Life may represent emergency medical services

A Star of Life, a six bar star overlaid with the Rod of Asclepius (the symbol of health), may be used as an alternative to cross or crescent symbols on ambulances.

In many scientific publications, the asterisk is employed as a shorthand to denote the statistical significance of results when testing hypotheses. When the likelihood that a result occurred by chance alone is below a certain level, one or more asterisks are displayed. Popular significance levels are <0.05 (*), <0.01 (**), and <0.001 (***).

On a Touch-Tone telephone keypad, the asterisk (called star, or less commonly, palm or sextile)[27] is one of the two special keys (the other is the number sign (pound sign or hash, hex or, less commonly, octothorp[27] or square)), and is found to the left of the zero. They are used to navigate menus in Touch-Tone systems such as Voice mail, or in Vertical service codes.

The Unicode standard has a variety of asterisk-like characters, compared in the table below. (Characters may display differently in different browsers and fonts.)

Retrieved from "http://en.turkcewiki.org/w/index.php?title=Asterisk&oldid=942752286"
This website is a mirror of Wikipedia, and is not affiliated with the Wikimedia Foundation.
Categories:
Hidden categories: