Ashok Lavasa did his schooling from Belgaum Military School. Ashok Lavasa is a graduate (BA Honours) from Deshbandhu college and a postgraduate (MA) in English from University of Delhi,[2][3][4] he has an MBA degree from Southern Cross University in New South Wales, Australia.[2][4] In addition, has an MPhil in defence and strategic studies.[3]

Before being appointed as an IAS officer, Lavasa taught literature in the Delhi University.[3][4] He also had a stint with the State Bank of India as a probationary officer.[3][4] 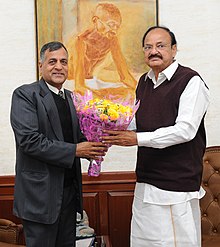 Lavasa calling on the Vice President of India, Venkaiah Naidu in February 2018

Lavasa has served in key positions for both the Government of India and the Government of Haryana, like as Principal Secretary and Financial Commissioner (Renewable Energy Sources), Principal Secretary and Financial Commissioner (Power), Chief Coordinator (Industries), resident commissioner of Haryana, managing director of Haryana State Federation of Co-operative Sugar Mills (HSFCOSML), director of Haryana State Industrial Development Corporation (HSIDC), managing director of Haryana Tourism Corporation (HTC), and as the deputy commissioner and district magistrate of Jind and Gurgaon districts in the Haryana government,[2][3][4] and as the Union Finance Secretary, Union Environment, Forests and Climate Change Secretary, Union Civil Aviation Secretary, special secretary in the Ministry of Power, joint secretary in the Ministry of Home Affairs, and as a joint secretary in the Department of Economic Affairs of the Ministry of Finance in the Indian government.[2][3][4]

Lavasa was appointed as the Union Expenditure Secretary by the Appointments Committee of the Cabinet (ACC) in April 2016,[10][11][12] he assumed office on 30 April 2016,[2] and demitted it and simultaneously superannuated from service on 30 October 2017.[2]

As the seniormost secretary in the Ministry of Finance after the retirement of Ratan Watal, Lavasa was designated as Finance Secretary in May 2016.[13][14][15] 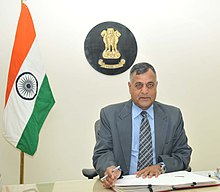 Mr Lavasa made headlines in 2019 after a dissenting opinion on a panel's ruling of complaints against Prime Minister Narendra Modi and Amit Shah during the Lok Sabha election campaign.

Six complaints were filed against PM Modi. Lavasa disagreed with his panel colleagues in some of these cases.

He soon stopped attending meetings, saying "minority decisions" were being "suppressed in a manner contrary to well-established conventions observed by multi-member statutory bodies".

In December 2019, Mr Lavasa in an article in The Indian Express wrote: "The honest, however, go on regardless, perhaps driven by an inner force that borders on recklessness. A society that creates hurdles which exhaust the honest or wound them paves the path for its own perdition".

This was two months after an income tax notice was sent to his wife, Novel S Lavasa, over alleged discrepancies in filings. Sources had said the information had been sought "related to foreign exchange". Mrs Lavasa said she had "paid all taxes due" and "disclosed all income" and that she was cooperating.[24][25]

Retrieved from "http://en.turkcewiki.org/w/index.php?title=Ashok_Lavasa&oldid=1088695687"
This website is a mirror of Wikipedia, and is not affiliated with the Wikimedia Foundation.
Categories:
Hidden categories: