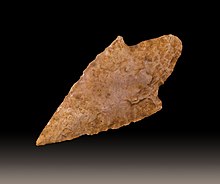 An arrowhead is a tip, usually sharpened, added to an arrow to make it more deadly or to fulfill some special purpose. The earliest arrowheads were made of stone and of organic materials; as human civilization progressed other materials were used. Arrowheads are important archaeological artifacts; they are a subclass of projectile points. Modern enthusiasts still "produce over one million brand-new spear and arrow points per year".[1] One who manufactures metal arrowheads is an arrowsmith.[2] 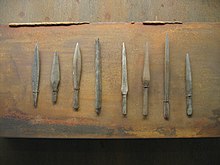 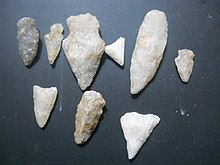 Some arrowheads made of quartz

In the Stone Age, people used sharpened bone, flintknapped stones, flakes, and chips of rock as weapons and tools. Such items remained in use throughout human civilization, with new materials used as time passed. As archaeological artifacts such objects are classed as projectile points, without specifying whether they were projected by a bow or by some other means such as throwing since the specific means of projection (the bow, the arrow shaft, the spear shaft, etc.) is found too seldom in direct association with any given point and the word "arrow" would imply a certainty about these points which simply does not exist.[3]

Such artifacts can be found all over the world in various locations. Those that have survived are usually made of stone, primarily consisting of flint, obsidian or chert. In many excavations, bone, wooden, and metal arrowheads have also been found.

Stone projectile points dating back 64,000 years were excavated from layers of ancient sediment in Sibudu Cave, South Africa. Examinations found traces of blood and bone residues, and glue made from a plant-based resin that was used to fasten them on to a wooden shaft. This indicated "cognitively demanding behavior" required to manufacture glue.[4]

These hafted points might have been launched from bows. While "most attributes such as micro-residue distribution patterns and micro-wear will develop similarly on points used to tip spears, darts or arrows" and "explicit tests for distinctions between thrown spears and projected arrows have not yet been conducted" the researchers find "contextual support" for the use of these points on arrows: a broad range of animals was hunted, with an emphasis on taxa that prefer closed forested niches, including fast moving, terrestrial and arboreal animals. This is an argument for the use of traps, perhaps including snares. If snares were used, the use of cords and knots which would also have been adequate for the production of bows is implied. The employment of snares also demonstrates a practical understanding of the latent energy stored in bent branches, the main principle of bow construction. Cords and knots are implied by use-wear facets on perforated shell beads around 72,000 years old from Blombos. Archeologists in Louisiana have discovered that early Native Americans used Alligator gar scales as arrow heads.

"Hunting with a bow and arrow requires intricate multi-staged planning, material collection and tool preparation and implies a range of innovative social and communication skills."[5]

Arrowheads are attached to arrow shafts to be shot from a bow; similar types of projectile points may be attached to a spear and "thrown" by means of an Atlatl (spear thrower).

The arrowhead or projectile point is the primary functional part of the arrow, and plays the largest role in determining its purpose. Some arrows may simply use a sharpened tip of the solid shaft, but it is far more common for separate arrowheads to be made, usually from metal, horn, rock, or some other hard material.

Arrowheads may be attached to the shaft with a cap, a socket tang, or inserted into a split in the shaft and held by a process called hafting.[6] Points attached with caps are simply slid snugly over the end of the shaft, or may be held on with hot glue. In medieval Europe, arrowheads were adhered with hide glue. Split-shaft construction involves splitting the arrow shaft lengthwise, inserting the arrowhead, and securing it using ferrule, sinew, rope, or wire.[7]

Modern arrowheads used for hunting come in a variety of classes and styles. Many traditionalist archers choose heads made of modern high carbon steel that closely resemble traditional stone heads (see Variants). Other classes of broadheads referred to as "mechanical" and "hybrid" are gaining popularity. Often, these heads rely on force created by passing through an animal to expand or open. 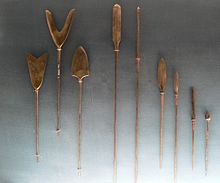 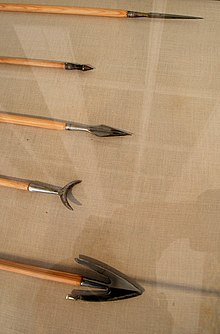 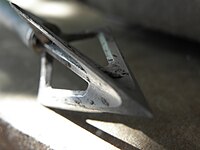 Arrowheads are usually separated by function:

The mechanical head flies better because it is more streamlined, but has less penetration as it uses some of the kinetic energy in the arrow to deploy its blades.[12]

Retrieved from "http://en.turkcewiki.org/w/index.php?title=Arrowhead&oldid=966098412"
This website is a mirror of Wikipedia, and is not affiliated with the Wikimedia Foundation.
Categories:
Hidden categories: