Arriva Shires & Essex is a bus operator providing services in Bedfordshire, Buckinghamshire, Essex, Hertfordshire and Greater London, with one service extending to Oxfordshire. Until 2002 its operations included Colchester. It is a subsidiary of Arriva UK Bus.

Arriva East Herts & Essex emerged from London Country North East (LCNE), one of the successor companies of London Country Bus Services. LCNE was broken in two. One of the successor companies, County Bus & Coach, with depots at Harlow, Hertford and Grays, was bought by its management in 1990. In 1994 County was sold to West Midlands Travel, itself bought by National Express in 1995. The Cowie Group bought County from National Express in 1996.[2] County Bus & Coach was renamed Arriva East Herts & Essex in April 1998.[1]

Cowie had also acquired Southend Transport and Colchester Borough Transport with its acquisition of British Bus in 1996. Both companies became part of Arriva East Herts & Essex, but in 2002 were transferred to Arriva Southern Counties together with the former County depot at Grays.

This was previously an Arriva East Herts & Essex garage, but it is now part of the Tellings-Golden Miller subsidiary with buses are branded as Network Harlow. In 2015, it reverted to being part of Arriva Southern Counties.[citation needed] 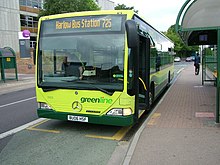 Ware garage replaced the Hertford depot in 1993. It runs part of route 724 along with Harlow garage. Operation of London bus route 327 was transferred from Ware to Arriva London's Enfield garage on 3 January 2009. Ware did briefly become an Arriva The Shires garage in late 2010, before transferring back to Arriva East Herts & Essex. On 4 September 2010 routes 250 and 251 transferred from Harlow to Ware.

Arriva The Shires Limited[3] is based in Luton and operates bus garages in Luton, Watford, High Wycombe, Aylesbury, Stevenage, Hitchin and Hemel Hempstead.

Arriva the Shires evolved from the purchase of the Luton, Aylesbury and Hitchin depots of United Counties by Luton & District Transport in a management buy-out in 1987.[4] Depots at Watford, High Wycombe, Hemel Hempstead, Amersham and Slough were acquired with London Country North West in 1990,[5] although Amersham has since closed and Slough was later sold to Bee Line.[6] LDT was bought in 1994 by British Bus, itself bought in 1996 by The Cowie Group. LDT's was renamed Arriva the Shires in April 1998.[3][7]

Aylesbury depot was a depot of United Counties acquired by LDT in 1987.

Leyland Olympian on route 74 in High Wycombe in July 2009

High Wycombe was another depot of London Country Bus Services (North West), acquired by LDT in 1988.

In 2000 Arriva also bought the High Wycombe depot of the Go-Ahead Group's Oxford Bus Company (which had bought it from the Bee Line in 1994).

In 2005 High Wycombe garage moved to a new purpose built depot following the closure of the old bus station in the town, where the previous garage was. High Wycombe operate a number of services.

Hitchin depot was a depot of United Counties acquired by LDT in 1987.

Hitchin services have been worked from Stevenage garage since January 2007 following the closure of the old former United Counties garage in Fishponds Road. Services around the Hitchin area have been reduced, and many are operated by other contractors including Centrebus.

Luton depot is purpose-built and is at 487 Dunstable Road. It replaced the previous depot at Castle Street. It also houses the Head Office for Arriva The Shires & Essex as well as the UK bus team.

Luton operates Green Line route 757 as well as local bus services, Luton also has an outstation at Stansted Airport which operates the EB2 an easyBus contract. 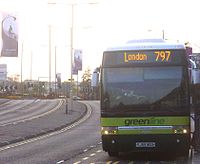 The Hitchin depot was a depot of United Counties acquired by LDT in 1987.

Hitchin services have been worked from Stevenage garage since January 2007 following the closure of the old former United Counties garage in Fishponds Road. Services around the Hitchin area have been reduced, and many are operated by other contractors including Centrebus.

Arriva is the main operator in Stevenage. They operate most services in the town, along with Centrebus.

When London Country Bus Services was broken up in 1986, the Stevenage depot passed to London Country North East, sold in 1988 to AJS Group who established the Sovereign brand. Most of the operation was sold in 1990 to Luton & District Transport, and therefore became part of Arriva in 1996. In 1996 Arriva took over several vehicles and routes from Sovereign, by then owned by the Blazefield Group, in exchange for the London Green Line route 797.[9] In 2004 Arriva acquired the last remaining Sovereign operation. Blazefield had already sold its London operations to Transdev London and its St Albans depot and routes to Centrebus.

In February 2006 Arriva bought the operations of MK Metro for £5.6 million,[10] and operational control transferred to The Shires & Essex. The purchase was subsequently considered by the Office of Fair Trading for possible referral to the Competition Commission, but it decided not to.[11] Vehicles and publicity for the Milton Keynes operation continued to use the MK Metro name until April 2010, when they were rebranded as Arriva Milton Keynes,[12] temporarily using the brand name MK Star. The change of name coincided with a number of controversial service changes. Many services were improved in frequency as part of the rebranding but others were reduced or withdrawn and some journey times were increased.[13]

A Wrightbus Cadet bodied DAF SB120 in Bletchley in March 2019

Route 250 remained in competition with route 255 operated by Harlow-based Roadrunner buses. Earlier in 2013 Arriva withdrew route 250[14] service to provide a stronger service on the 251 and to expand onto the 310 route from Waltham Cross to Ware. Many of the buses used on the 250 service can now be seen on the 251 service operating from Upshire to Hammond Street more frequently.[15] 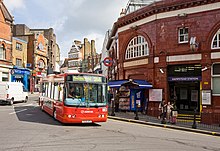 Retrieved from "http://en.turkcewiki.org/w/index.php?title=Arriva_Shires_%26_Essex&oldid=934952296"
This website is a mirror of Wikipedia, and is not affiliated with the Wikimedia Foundation.
Categories:
Hidden categories: