Jump to navigation Jump to search
Sum of a collection of numbers divided by the count of numbers in the collection
For broader coverage of this topic, see Mean.

In mathematics and statistics, the arithmetic mean ( /ˌærɪθˈmɛtɪk ˈmiːn/, stress on first and third syllables of "arithmetic"), or simply the mean or the average (when the context is clear), is the sum of a collection of numbers divided by the count of numbers in the collection.[1] The collection is often a set of results of an experiment or an observational study, or frequently a set of results from a survey. The term "arithmetic mean" is preferred in some contexts in mathematics and statistics, because it helps distinguish it from other means, such as the geometric mean and the harmonic mean.

In addition to mathematics and statistics, the arithmetic mean is used frequently in many diverse fields such as economics, anthropology and history, and it is used in almost every academic field to some extent. For example, per capita income is the arithmetic average income of a nation's population.

While the arithmetic mean is often used to report central tendencies, it is not a robust statistic, meaning that it is greatly influenced by outliers (values that are very much larger or smaller than most of the values). For skewed distributions, such as the distribution of income for which a few people's incomes are substantially greater than most people's, the arithmetic mean may not coincide with one's notion of "middle", and robust statistics, such as the median, may provide better description of central tendency.

Given a data set

, the arithmetic mean (or mean or average), denoted

bar), is the mean of the

The arithmetic mean is the most commonly used and readily understood measure of central tendency in a data set. In statistics, the term average refers to any of the measures of central tendency. The arithmetic mean of a set of observed data is defined as being equal to the sum of the numerical values of each and every observation, divided by the total number of observations. Symbolically, if we have a data set consisting of the values

, then the arithmetic mean

is defined by the formula:

(for an explanation of the summation operator, see summation.)

If the data set is a statistical population (i.e., consists of every possible observation and not just a subset of them), then the mean of that population is called the population mean, and denoted by the Greek letter

.[2] If the data set is a statistical sample (a subset of the population), then we call the statistic resulting from this calculation a sample mean (which for a data set

The arithmetic mean can be similarly defined for vectors in multiple dimension, not only scalar values; this is often referred to as a centroid. More generally, because the arithmetic mean is a convex combination (coefficients sum to 1), it can be defined on a convex space, not only a vector space.

The arithmetic mean has several properties that make it useful, especially as a measure of central tendency. These include:

, as is the median. However, when we consider a sample that cannot be arranged so as to increase arithmetically, such as

There are applications of this phenomenon in many fields. For example, since the 1980s, the median income in the United States has increased more slowly than the arithmetic average of income.[5]

A weighted average, or weighted mean, is an average in which some data points count more heavily than others, in that they are given more weight in the calculation.[6] For example, the arithmetic mean of

. In contrast, a weighted mean in which the first number receives, for example, twice as much weight as the second (perhaps because it is assumed to appear twice as often in the general population from which these numbers were sampled) would be calculated as

. Here the weights, which necessarily sum to the value one, are

in the above example, and equal to

in a situation with 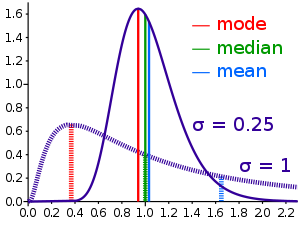 Particular care must be taken when using cyclic data, such as phases or angles. Naively taking the arithmetic mean of 1° and 359° yields a result of 180°. This is incorrect for two reasons:

In general application, such an oversight will lead to the average value artificially moving towards the middle of the numerical range. A solution to this problem is to use the optimization formulation (viz., define the mean as the central point: the point about which one has the lowest dispersion), and redefine the difference as a modular distance (i.e., the distance on the circle: so the modular distance between 1° and 359° is 2°, not 358°).

The arithmetic mean is often denoted by a bar, for example as in

Some software (text processors, web browsers) may not display the x̄ symbol properly. For example, the x̄ symbol in HTML is actually a combination of two codes - the base letter x plus a code for the line above (&#772; or ¯).[8]

In some texts, such as pdfs, the x̄ symbol may be replaced by a cent (¢) symbol (Unicode &#162), when copied to text processor such as Microsoft Word. 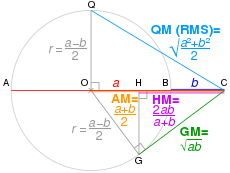 Retrieved from "http://en.turkcewiki.org/w/index.php?title=Arithmetic_mean&oldid=1027030607"
This website is a mirror of Wikipedia, and is not affiliated with the Wikimedia Foundation.
Categories:
Hidden categories: