Jump to navigation Jump to search
Not to be confused with Arbalist (crossbowman). 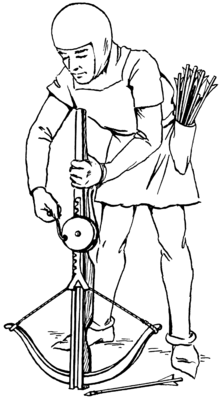 The arbalest (also arblast) was a late variation of the crossbow coming into use in Europe during the 12th century. A large weapon, the arbalest had a steel prod ("bow"). Since the arbalest was much larger than earlier crossbows, and because of the greater tensile strength of steel, it had a greater force. However, the greater draw weight was offset by the smaller powerstroke, which limited its potential in fully transferring the energy into the crossbow bolt. The strongest windlass-pulled arbalests could have up to 22 kN (2,200 kilograms-force; 4,900 pounds-force) of force and be accurate up to 100 m (110 yards).[citation needed] A skilled arbalestier (arbalester) could loose two bolts per minute.

The term "arbalest" is sometimes used interchangeably with "crossbow". Arbalest is a Medieval French word originating from the Roman name arcuballista (from arcus 'bow' + ballista 'missile-throwing engine'),[1] which was then used for crossbows, although originally used for types of artillery. Modern French uses the word arbalète, which is linguistically one step further from the stem (disappearance of the s phoneme in the last syllable, before t).

The word applies to both crossbow and arbalest (the latter may be referred to as a heavy crossbow, but an actual heavy crossbow may not be the same as an arbalest). In some cases, the word has been used to refer to arbalists, the people who actually used the weapon.

Retrieved from "http://en.turkcewiki.org/w/index.php?title=Arbalest&oldid=944764813"
This website is a mirror of Wikipedia, and is not affiliated with the Wikimedia Foundation.
Categories:
Hidden categories: