The Apple Computer 1, originally released as the Apple Computer and known later as the Apple I, or Apple-1, is a desktop computer released by the Apple Computer Company (now Apple Inc.) in 1976. It was designed and hand-built by Steve Wozniak.[2][3] The idea of selling the computer came from Wozniak's friend Steve Jobs.[4][5] The Apple I was Apple's first product, and to finance its creation, Jobs sold his only motorized means of transportation, a VW Microbus,[6] for a few hundred dollars (Wozniak later said that Jobs planned instead to use his bicycle to get around), and Wozniak sold his HP-65 calculator for $500.[7] Wozniak demonstrated the first prototype in July 1976 at the Homebrew Computer Club in Palo Alto, California.[8]

Production was discontinued on September 30, 1977, after the June 10, 1977 introduction of its successor, the Apple II, which Byte magazine referred to as part of the "1977 Trinity" of personal computing (along with the PET 2001 from Commodore Business Machines and the TRS-80 Model I from Tandy Corporation).[9] 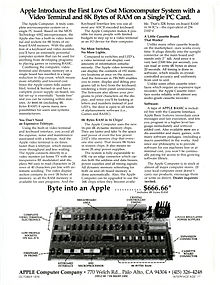 Introductory advertisement for the Apple I computer

On March 5, 1975, Steve Wozniak attended the first meeting of the Homebrew Computer Club in Gordon French's garage. He was so inspired that he immediately set to work on what would become the Apple I computer.[10] After building it for himself and showing it at the Club, he and Steve Jobs gave out schematics (technical designs) for the computer to interested club members and even helped some of them build and test out copies. Then, Steve Jobs suggested that they design and sell a single etched and silkscreened circuit board—just the bare board, with no electronic parts—that people could use to build the computers. Wozniak calculated that having the board design laid out would cost $1,000 and manufacturing would cost another $20 per board; he hoped to recoup his costs if 50 people bought the boards for $40 each. To fund this small venture—their first company—Jobs sold his van and Wozniak sold his HP-65 calculator. Very soon after, Steve Jobs arranged to sell "something like 50" completely built computers to the Byte Shop (a computer store in Mountain View, California) at $500 each. To fulfill the $25,000 order, they obtained $20,000 in parts at 30 days net and delivered the finished product in 10 days.[11]

The first unit produced was used in a high school math class, and donated to Liza Loop's public-access computer center.[14] About 200 units were produced, and all but 25 were sold within nine or ten months.[11]

The Apple I's built-in computer terminal circuitry was distinctive. All one needed was a keyboard and a television set. Competing machines such as the Altair 8800 generally were programmed with front-mounted toggle switches and used indicator lights (red LEDs, most commonly) for output, and had to be extended with separate hardware to allow connection to a computer terminal or a teletypewriter machine. This made the Apple I an innovative machine for its day. In April 1977, the price was dropped to $475.[15] It continued to be sold through August 1977, despite the introduction of the Apple II in April 1977, which began shipping in June of that year.[16] In October 1977, the Apple I was officially discontinued and removed from Apple's price list.[17] As Wozniak was the only person who could answer most customer support questions about the computer, the company offered Apple I owners discounts and trade-ins for Apple IIs to persuade them to return their computers.[18] These recovered boards were then destroyed by Apple, contributing to their rarity today.[19] 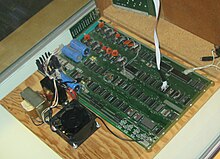 The circuit board of a fully assembled Apple I

Original 1976 Apple I computer in a briefcase. From the Sydney Powerhouse Museum collection.

As of 2013, sixty-three Apple I computers have been confirmed to exist. Only six have been verified to be in working condition.

Both Steve Jobs and Steve Wozniak have stated that Apple did not assign serial numbers to the Apple l. Several boards have been found with numbered stickers affixed to them, which appear to be inspection stickers from the PCB manufacturer/assembler. A batch of boards is known to have numbers hand-written in black permanent marker on the back; these usually appear as "01-00##" and anecdotal evidence suggests they are inventory control numbers added by the Byte Shop to the batch Apple sold them. These Byte Shop numbers have often erroneously been described as serial numbers by auction houses and in related press coverage.[47]

Several Apple I clones and replicas have been released in recent years. These are all created by hobbyists and marketed to the hobbyist/collector community. Availability is usually limited to small runs in response to demand.

Retrieved from "http://en.turkcewiki.org/w/index.php?title=Apple_I&oldid=971578343"
This website is a mirror of Wikipedia, and is not affiliated with the Wikimedia Foundation.
Categories:
Hidden categories: