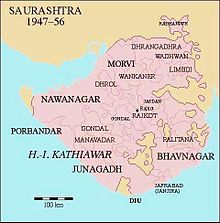 Location of Junagarh State in Saurashtra, among all the princely states shown in pink.

In the independence and partition of British India of 1947, the 552 princely states were given a choice to either join the new Dominion of India or the newly formed state of Pakistan.

The Nawab of Junagarh, Muhammad Mahabat Khanji III, a Muslim whose ancestors had ruled Junagarh and small principalities for some two hundred years, decided that Junagarh should become part of Pakistan, much to the displeasure of many of the people of the state, an overwhelming majority of whom were Hindus. The Nawab acceded to the Dominion of Pakistan on 15 September 1947, against the advice of Lord Mountbatten, arguing that Junagarh joined Pakistan by sea.[citation needed] The principality of Babariawad and Sheikh of Mangrol reacted by claiming independence from Junagarh and accession to India,[1] although the Sheikh of Mangrol withdrew his accession to India the very next day.[2] When Pakistan accepted the Nawab's Instrument of Accession on 16 September, the Government of India was outraged that Muhammad Ali Jinnah could accept the accession of Junagarh despite his argument that Hindus and Muslims could not live as one nation. Sardar Vallabhbhai Patel believed that if Junagarh was permitted to go to Pakistan, it would exacerbate the communal tension already simmering in Gujarat.

The princely state was surrounded on all of its land borders by India, with an outlet onto the Arabian Sea. The unsettled conditions in Junagarh had led to a cessation of all trade with India and the food position became precarious. With the region in crisis, the Nawab, fearing for his life, felt forced to flee to Karachi with his family and his followers, and there he established a provisional government.

Vallabhbhai Patel offered Pakistan time to reverse its acceptance of the accession and to hold a plebiscite in Junagarh. Samaldas Gandhi formed a government-in-exile, the Aarzi Hukumat (in Urdu: Aarzi: Temporary, Hukumat: Government) of the people of Junagarh. Eventually, Patel ordered the forcible annexation of Junagarh's three principalities. Junagarh's state government, facing financial collapse and lacking forces with which to resist Indian force, invited the Government of India to take control. A plebiscite was conducted in December, in which approximately 99.95% of the people chose India over Pakistan.[3]

Scholars have observed that India annexed Junagarh through force[4][5][6][7] with scholars viewing the annexation as part of a wider programme by the Indian state of forcing or bullying the rulers of princely states to accede.[8][9]

After the announcement by the last Viceroy of India, Lord Mountbatten, on 3 June 1947, of the intention to partition British India, the British parliament passed the Indian Independence Act 1947 on 11 July 1947. As a result, the native states were left with these choices: to accede to either of the two new dominions, India or Pakistan or to remain an independent state.

The constitutional adviser to the Nawab of Junagarh, Nabi Baksh, and Junagarh's ministers gave the impression to Mountbatten that Junagarh intended to accede to India.[10] However, Muslim League politicians from Sindh soon joined Junagarh's executive council and under the influence of the Muslim League the Nawab decided to accede his state to Pakistan,[11][12][13] in disregard of Mountbatten's contiguity principle.[14] In theory this was permissible for Junagarh. Mountbatten's contention was that only states bordering Pakistan should accede with it.[15]

The Indian Government made efforts to persuade Nawab Sahab of Junagarh to accede to India, but he remained firm. The Indian minister V. P. Menon came to request an accession to India, threatening consequences in case of denial. The Nawab however decided to accede to Pakistan, and an announcement to this effect was made in the gazette (Dastrural Amal Sarkar Junagarh) on 15 August 1947.[16][failed verification]

Later at the United Nations Security Council, India's argument revolved around the wishes of the people which it accused the Nawab of ignoring. India's representative at the UNSC was also advised to avoid legalistic arguments about the Instrument of Accession because of the effect it could have on Kashmir.[19]

To force the Nawab of Junagarh to change his decision, India thrust a blockade upon the state.[28][21] India later denied ever having blocked Junagarh's supplies.[29] The blockade compelled the state's ruler to leave for Pakistan,[32] who left the state's administration to Sir Shahnawaz Bhutto. Menon claimed that the Nawab had delegated the state's destiny to Bhutto, which is implausible because the Nawab had acceded the state's defence and external affairs to Pakistan beforehand. Bhutto requested the regional commissioner for administrative assistance "pending an honourable setlement of the several issues involved in Junagadh's accession." Thus, by 9 November 1947, the Indian Government assumed the state's administration using the "pretext" of re-establishing peace.[33]

In view of special circumstances pointed out by Junagadh Dewan that is the Prime Minister of Junagadh – our Regional Commissioner at Rajkot has taken temporarily charge of Junagadh administration. This has been done to avoid disorder and resulting chaos. We have, however, no desire to continue this arrangement and wish to find a speedy solution in accordance with the wishes of the people of Junagadh. We have pointed out to you previously that final decision should be made by means of referendum or plebiscite. We would be glad to discuss this question and allied matters affecting Junagadh with representatives of your Government at the earliest possible moment convenient to you. We propose to invite Nawab of Junagadh to send his representatives to this conference.[34]

Your telegram informing that your Government had taken charge of Junagadh was received by me on November 10, 1947. Your action in taking over State Administration and sending Indian troops to state without any authority from Pakistan Government and indeed without our knowledge, is a clear violation of Pakistan territory and breach of International law.[35]

Reports arrived of widespread murder, rape and looting of Muslims in Junagarh following the arrival of Indian troops.[36] Many Muslims from Junagarh began migrating to Pakistan.[37]

After India assumed administration in Junagarh, India's Ministry of Law stated that the accession of Junagarh to Pakistan had not been invalidated by plebiscite and that Junagarh had not yet acceded to India. But India went ahead with the referendum because it believed the result would be in its favour.[38]

On 24 September, legal adviser Monckton told Mountbatten that Pakistan's consent would be needed for any plebiscite India wished to conduct in Junagarh because of the Nawab's accession to Pakistan.[39]

Nehru had shifted from his earlier position of allowing a plebiscite under the UN and now said that it was unnecessary for a plebiscite to be held under the UN though it could send one or two observers if it wished to do so. However, India also made it clear that it would not under any circumstances postpone the plebiscite so as to allow the UN or Pakistan to send observers.[40] A plebiscite was held on 20 February 1948, in which all but 91 out of 190,870 who voted (from an electorate of 201,457) voted to join India, i.e. 99.95% of the population voted to join India.[41]

Douglas Brown of the Daily Telegraph as well as Pakistani newspaper Dawn expressed concerns about the propriety of the plebiscite's arrangement. On 26 February, Pakistan termed India's proceeding with the plebiscite a 'discourtesy to Pakistan and the Security Council'.[42] In the plebiscite India polled 222,184 votes and Pakistan 130 out of a total population of 720,000 of Junagarh and its feudatories.[42]

Only 15 percent (21,606) of Junagarh's Muslim population voted while 30 percent (179,851) of the non-Muslim population voted. The total number of voters on electoral rolls was 200, 569 and less than 10,000 Muslims voted for India.[42] In Manvadar, 276 out of 520 Muslims voted for India, in Bantwa 19 out of 39 and 79 out of 231 in Sardargarh. In Bantwa and Babariawad the number of voters who cast their votes in India's favour was less than the number of non-Muslim voters there, which meant that even some non-Muslims did not vote for India.[42] According to scholar Rakesh Ankit India took liberties with facts and laws as it acted as the "judge, jury and executioner" of the entire situation.[43]

Retrieved from "http://en.turkcewiki.org/w/index.php?title=Annexation_of_Junagadh&oldid=960856974"
This website is a mirror of Wikipedia, and is not affiliated with the Wikimedia Foundation.
Categories:
Hidden categories: