Jump to navigation Jump to search
Not to be confused with Angus Robertson.

Angus & Robertson (A&R) is a major Australian bookseller, publisher and printer. As book publishers, A&R has contributed substantially to the promotion and development of Australian literature.[1][2][3][4] This well known Australian brand currently exists as an online shop owned by online bookseller Booktopia. The Angus & Robertson imprint is still seen in books published by HarperCollins, a News Corporation company. 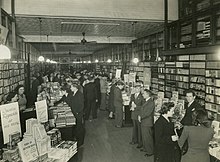 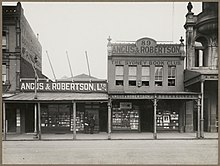 The first bookstore was opened in 110½ Market Street, Sydney by Scotsman David Angus in 1884; it initially sold only secondhand books.[5] In 1886, he went into partnership with fellow Scot George Robertson. This George Robertson should not be confused with his older contemporary, George Robertson the Melbourne bookseller, who later traded as Robertson & Mullens. In 1900, David Angus, plagued by ill health, retired from the partnership to England, where he died soon after. Frederick Wymark took over a large portion of Angus's share in the company.[6]

In 1895 the company moved to 89 Castlereagh Street, Sydney. The head office of the firm was at Castlereagh Street until the 1950s. The shop was known as the "biggest bookshop in the world".[7] In 1907 the partnership was converted into a public company: Angus & Robertson Limited. In 1951 a store was established in High Commission of Australia, London, which operated until the 1970s.

In the 1950s, Angus & Robertson began the growth which led it to become Australia's first nationwide chain of bookstores. In 1977, it opened its first franchise store in the southern Sydney suburb of Hurstville. In 2006, the company had over 170 stores spread throughout the country, and it claimed that it had more than twice as many stores as Australia's next largest bookseller.[8] The firm had about 18% share in the Australian book retail market.[9]

In 2011, it closed all physical stores and became online only book retailer after 125 years of existence.

Angus & Robertson began publishing in 1888. Their first work was a book of verse, A Crown of Wattle, written by a Sydney solicitor, H. Peden Steel. From the early years of publishing to 1900, Angus and Robertson developed a highly successful and profitable marketing formula and mix of products: a mixture of literary publishing together with educational publishing, plus active marketing by distributing large numbers of review copies. They also published valuable reference works, including the Australian Encyclopaedia, John Alexander Ferguson's multi-volume Bibliography of Australia, and the early years of Art in Australia.[1] In 1938 A&R opened a publishing office in London.

To better control printing costs, and maintain a consistent quality, George Robertson bought a printing company Eagle Press in 1929, and renamed it Halstead Press (after his birthplace in Essex). Printing thus became the third tier of the Angus & Robertson business. It was Australia's leading book printer for forty years. However, the printing presses had become antiquated by the 1970s. After a corporate takeover, the printing presses were sold to John Sands. Halstead became a publishing imprint, Robertson's great grandson having acquired the logo and identity. These he passed on to the present company, Halstead Press, when it was set up in 1991.[citation needed]

About 1895 or 1896, George Robertson started The Sydney Book Club (SBC), based on the principles of a lending library. It evolved out of the actions of a group of legal men who bought 100 books for reading among themselves, then sold the books back to A&R. The SBC was a great success and highly profitable, as the same book could be borrowed by post and returned many times. Fifty to 100 copies of A&R bestsellers were often available for loan. The SBC had a vast membership throughout Australia, particularly in remote rural areas. It closed in 1958, as space was no longer available because of expansion of retail trade. Also, the rapid expansion of local government libraries throughout Australia offered a more localized and free service.[11]

Support for literary societies and authors[edit]

From time to time, Angus & Robertson has offered substantial support to literary societies. For example, it published the literary journal Southerly for some years. In 1947, the Book Collectors Society of Australia (BCSA) started publication of its monthly newsletter Biblionews. Until the 1970s, Angus & Robertson printed the newsletter free of charge, in return for the enclosure of a brochure about recent A&R publications. Eric Russell, an editor at Angus & Robertson (and local historian), was a consistent supporter of, and committee member of, the BCSA.[12]

A&R has provided substantial incentives for promising Australian writers. For example, A&R frequently applied for federal grants to subsidise the publication of worthwhile but limited-market books.[10]

From 1959, a battle for control of Angus & Robertson commenced, based on its undervalued property holdings. Walter Burns, an outsider and real estate speculator, bought a large block of shares. He was appointed as managing director with the support of George Ferguson, but was soon in serious dispute with Ferguson.[14]

In 1970, entrepreneur Gordon Barton, via his IPEC transport company, bought the William Collins shares, and in 1971 made a takeover offer, and soon had control.[16] Many of the old staff resigned, and a long period of rapid change followed, in which mass-market books became increasingly preferred, instead of high-brow and educational literature. Richard Walsh was managing director and publisher for 14 years (1972 to 1986), and he overhauled and modernised the antiquated and ossified business environment.[17] From 1978, the publisher and bookseller were owned by separate companies.

Ownership of the retail bookseller has changed several times since 1978, when it was purchased by Gordon & Gotch who invested substantial funds in upgrading and expanding the stores, including a major new store in Sydney's Imperial Arcade. When Gordon & Gotch was taken over by Herald & Weekly Times the business was sold to music retailer Brashs, who also bought Terry Herbert's Queensland-based Bookworld.[19] For several years the company went by the name Angus & Robertson Bookworld before eventually dropping Bookworld as part of the name. Ownership of the company then passed on to Whitcoulls which was itself later purchased by WH Smith in 2001.[citation needed]

From 2009, Angus & Robertson was under the portfolio of REDgroup Retail, a retail operations company owned by Pacific Equity Partners, a private equity company, which loaded A&R with large debts. In February 2011, REDGroup (including the Borders, Angus & Robertson and Whitcoulls chains) were placed into administration.[20] Retail stores were closed, and the A&R and Borders websites were sold to media conglomerate Pearson, which owns Penguin Books, and operations were moved from Sydney to Melbourne.[21] In 2012 the Borders website was rebranded "Bookworld", but the Angus & Robertson website (still widely known) was retained as a clone of Bookworld.

Demand for payment from smaller publishers[edit]

In August 2007, A & R Whitcoulls Group's commercial manager, Charlie Rimmer, demanded payments ranging between $2,500 and $20,000 from smaller distributors and publishers to make up for reduced profitability compared to other suppliers. The letter, leaked by Tower Books to the public, claimed that if the payment was not made, the books from the supplier would no longer be sold in A&R stores. Many publishers expressed disbelief at A&R's decision. Tower declared that they will withdraw supply for A&R as per the letter's requirement.[23]

In response to the situation, Dave Fenlon, Chief Operating Officer at Angus & Robertson, responded by claiming that the whole situation is blown up out of proportion and that A&R is simply negotiating a new business agreement with selected suppliers deemed to not be meeting their obligations to the company and that Angus & Robertson is committed to selling Australian published books from a large range of Australian publishers, large and small.[24]

Wikisource has original works published by or about:
Angus & Robertson
Retrieved from "http://en.turkcewiki.org/w/index.php?title=Angus_%26_Robertson&oldid=996954266"
This website is a mirror of Wikipedia, and is not affiliated with the Wikimedia Foundation.
Categories:
Hidden categories: