(Redirected from Amal (motorcycle))
Jump to navigation Jump to search

AMAL was a British engineering company servicing the motorcycle and other light-engineering motor industries between 1927 and 1993[1] based in Birmingham, England.[2]

AMAL is a British carburettor trademark. Amal was the supplier of carburettors to many marques within the British motorcycle industry[3] including the largest of British manufacturers, such as BSA and AMC, and to producers of small industrial engines.

The main carburettor types commonly associated with Amal are slide carburettors for motorcycles. These were historically distinguishable as two types: the Monobloc with integral, offset float chamber and Concentric, a later development with repositioned float chamber directly under the body and air-slide.

Less-common types, known as GP and TT, were mainly for road-racing and other competition use, and were used on high-performance road machines such as BSA Gold Star, BSA Spitfire and Velocette Thruxton.

Amal's light-alloy levers with click-stop adjusters 509/001 brake and 509/002 clutch were taken-over by BSA and marketed under their 'Motoplas' accessories branding from 1967, with Doherty taking-over production of the traditional chromed-steel levers.[7]

With the decline of the British motorcycle industry, the use of Amal carburettors declined, but they are still produced under different ownership as spares for the classic market.

Besides carburettors for light-applications such as types 308 and 355 for Pedal Cycle Motors,[8] Amal historically had three popular carburettor designs: 'Standard' fitted up to 1955, 'Monobloc' fitted from 1955 and 'Concentric' fitted from 1967.[9]

The most historic - 76 & 276 Series (Amal 'Standard' series) can be spigot or flange fixing with adjustment screws on the left or right hand sides of the carburetter body. The available bore sizes are 15/16", 1" and 1 1/16" diameters. The 276 type carburettor is, in virtually all aspects, identical to the 76 version, except that the main emulsion air is drawn from inside the air intake (air filter) whilst the 76 carburettor uses unfiltered air. The 76 types are of die-cast zinc construction and were introduced in the early 1930s, replacing the earlier 6 series, which were of bronze construction, although basically the same design. The 276 type was introduced in 1940 in an attempt to improve the carburettor's durability in dusty and dirty operating environments. 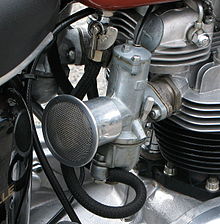 Amal Concentric carburettor, one of two fitted to a Triumph Bonneville, with the second just visible to the rear

The largest bore at 32mm was slightly larger than any previous Monobloc, and all were flange-fitting with stud-holes at two-inch centres.[10]

The Concentric design with non-protruding float chamber was both slimmer and shorter, enabling easier mounting to two-port cylinder heads. Left or right sided carburettors could be produced from basically the same die-casting, and the design was compatible with up to 40 degrees of downdraught.[10]

The AMAL company was formed in the late 1920s when three manufacturers amalgamated – Amac, Brown and Barlow, and Binks – to manufacture carburettors and associated products under the name Amalgamated Carburetters Ltd.[1]

The name changed to Amal Ltd in 1931.[1] Amal subsequently became partly owned by IMI Group, and the product range was expanded to include handlebars and controls with full IMI ownership by the middle 1960s.[1] It was sold after June 1973[11] to Grosvenor Works Ltd of North London - a supplier of fuel system components. Under Grosvenor some of the most popular obsolete ranges were remanufactured.[1]

In 2003, the business was sold to Burlen Fuel Systems Limited, a company that also produces SU, Solex and Zenith, three other classic carburettor ranges.

Amal carburettors were used on Cooper Formula 3 racing cars and racing motor cycles. Coopers fitted with the J.A.P. 1,100 cc engine with such a carburettor were popular in hill climbs and sprints competitions, and were used by the frequent champion in the 1960s, David Boshier Jones.[12][page needed]

Retrieved from "http://en.turkcewiki.org/w/index.php?title=Amal_(carburettor)&oldid=893644416"
This website is a mirror of Wikipedia, and is not affiliated with the Wikimedia Foundation.
Categories:
Hidden categories: