Jump to navigation Jump to search
Place in Basel-Landschaft, Switzerland

Allschwil (German pronunciation: [ˈalʃvil]) is a town and a municipality in the district of Arlesheim in the canton of Basel-Country in Switzerland.

Allschwil is a seamless suburb of Basel and is located between Basel to the east and Alsace in France to the west.

The official language of Allschwil is (the Swiss variety of Standard) German, but the main spoken language is the local variant of the Alemannic Swiss German dialect.

The modern municipality of Allschwil is first mentioned in 1118 as Almswilre.[3]

The region around Allschwil has been occupied since at least the Middle Paleolithic. Archeological finds from the municipality include a few scattered Middle Paleolithic items, cups from the Glockenbecherkultur (c. 2400–1800 BC), a mid-Bronze Age hoard (presumably a metal depot) and a Hallstatt culture settlement at in den Vogelgärten. In 1937, at New-Allschwil, a Gallo-Roman cremation cemetery (from c. AD 25–60) was discovered. It is one of the oldest in northern Switzerland. It is possible that the Roman road station Arialbinum (mentioned in "Antonine Itinerary" and "Tabula Peutingeriana") may correspond to Allschwil.[3]

Allschwil was part of the Herrschaft of Birseck, which was given in 1004 as an imperial donation to the Bishop of Basel. Through the middle of the 15th century the Herrschaft was often pawned and sold. The town of Allschwil was located along the Alsace-Solothurn via Passwang pass trading route along the border. Its location on the border and trade route allowed Allschwil to grow into an important customs facility. After 1724 it housed the northern salt warehouse of the vogtei of the diocese of Basel. Allschwil was one of the seven so-called free villages (Vagantes extra civitate Basiliensem) and was therefore under the parish of St. John's Chapel at Basel's cathedral for baptism and high church festivals.[3]

In the wake of the German Peasants' War Allschwil, together with Reinach, Therwil, Oberwil and Ettingen, joined Basel in 1525 with a Burgrecht agreement. This agreement was dissolved in 1585 in the Baden Agreement. In 1529 the village embraced the Protestant Reformation and converted to the new faith. Nearly a hundred years later, in 1627, the Bishop of Basel succeeded in spreading the Counter-Reformation to Allschwil. After 1567 there was a Jewish settlement in Allschwil. In 1692 there were 24 Jewish families living in the Judengässlein (from German: Little Jewish Alley) and they made up about 15% of the population. They had their own cemetery in Zwingen and a funeral right in Hegenheim. Children of Jews and Christians attended the 17th-century school together. Accusations of horse theft and Jewish plans to build a synagogue in Allschwil led to an expulsion decree in 1694 from the Bishop. Many of the Jews fled to Hegenheim.[3]

The village Church of St. Peter and Paul was built in the 12th century and was under the patronage of the Basel cathedral. The lower part of the church tower is from the 12th/13th century, but the rest of the church was totally rebuilt in 1698–99. The parish of Allschwil also included Schönbuch, Hésingue (now in France) and until 1611, Hégenheim (also in France).[3]

In 1815 Allschwil became part of the Canton of Basel and when the canton split in 1833, it became part of the new canton of Basel-Country. The split between Basel-City and Basel-Country led to shift in religious power in Allschwil. In 1877, the Roman Catholic Reverend Peter Wildman was voted out by the parishioners and was replaced by Johannes Schmid a Christian Catholic priest. The village church then became Christian Catholic. In 1878 the Swiss Reformed Church founded a parish in Allschwil. By 1970 about 54% of the inhabitants were Swiss Reformed, while 40% were Roman Catholic.[3] 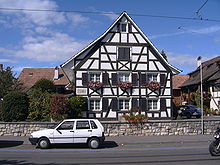 Half Timbered house in the village center

By 1860 the agricultural village of Allschwil was converting into an industrial town. Many of the inhabitants were working in factories in Basel. The farmers were mostly growing grain and vegetables, which they supplied to the nearby market of Basel. Allschwil was especially known for its white cabbage. Between 1897 and 1921, the cabbage was processed in a sauerkraut factory, which was built by the village agricultural collective. By the end of the 19th century hemp, flax and vineyards had all disappeared from the village. In 1955 there were 63 farms, while in 1965 it was down to 29, and in 1980 the number of farms had only slightly increased to 31. Until 1930 the industrial sector grew strongly in Allschwil (mainly brick, along with clothing, metal and machinery industry) and in 1910 about 73% of workers worked in industry. In the 1870s several brick factories opened in Allschwil, including Passavant-Iselin & Co. a company that had the first interlocking tile press in Switzerland. Passavant-Iselin & Co. remained in operation until they closed in 1975. The lack of railway connection (the 1926 proposed rail freight terminal was never realized) prevented a greater industrial development. In addition, with the rise of Rhine shipping, Allschwil lost its importance as customs station. A tram line to Basel opened in 1905. By 1910 about 40% of the working population commuted out of Allschwil for work, by 1990 this had increased to 79%. Today, Allschwil is focused on light industry including industrial metals, paper industry and chemistry. In 1990, 35% of workers were in the industrial sector and 54% were in the services sector.[3]

Allschwil experienced a massive population growth between 1850 and 1970 thanks to immigration from Basel. In 1930 it was the most populous municipality outside Basel, and suffered typical infrastructure problems. Since 1970, the growth has stagnated. The center of the town has retained its village-like appearance. This is reinforced by the restoration of the mid-19th-century half timbered houses, which were given an award in 1976 from the Council of Europe, and another in 1980 for their village center planning. A town history museum opened in 1968 and in 1977 the Allschwiler market was established.[3] 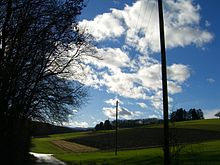 Of the built-up area, industrial buildings made up 4.9% of the total area while housing and buildings made up 20.6% and transportation infrastructure made up 8.1%. Power and water infrastructure as well as other special developed areas made up 2.2% of the area while parks, green belts and sports fields made up 7.2%. Out of the forested land, 25.8% of the total land area is heavily forested and 1.2% is covered with orchards or small clusters of trees. Of the agricultural land, 19.8% is used for growing crops and 6.3% is pastures, while 3.3% is used for orchards or vine crops. All the water in the municipality is flowing water.[4]

The municipality is located in the Arlesheim district, on the edge of the Sundgauer Hill Country along the Upper Rhine valley.

Allschwil is a suburb of Basel on the west and has the border with France on two sides. The neighboring municipalities in Switzerland are, besides Basel, Schönenbuch, Oberwil, and Binningen, and the French communes of Neuwiller, Buschwiller, Hégenheim, and Saint-Louis.

The blazon of the municipal coat of arms is Azure, a Sword Argent and a Key Or in saltire.[5] 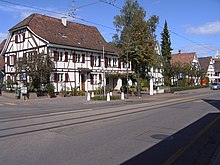 Restored Half Timbered houses in the center of Allschwil 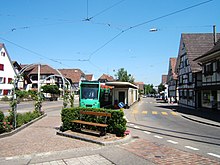 The historical population is given in the following chart:[3][13]

Allschwil is now largely a residential bedroom community for the city of Basel, with some light industry, notably in electronics, chemicals, pharmaceuticals, and biotech. It is a highly prized residential district because of its proximity to the city combined with a more rural atmosphere and open spaces.

It is also attractive because of its lower taxes.[citation needed]

The head office of Farnair Switzerland is located in the Villa Guggenheim in Allschwil.[18] The head office moved to its current location, in proximity to EuroAirport Basel-Mulhouse-Freiburg, on 1 October 2011.[19]

In Allschwil about 7,897 or (43.6%) of the population have completed non-mandatory upper secondary education, and 2,846 or (15.7%) have completed additional higher education (either university or a Fachhochschule). Of the 2,846 who completed tertiary schooling, 56.5% were Swiss men, 25.9% were Swiss women, 10.4% were non-Swiss men and 7.2% were non-Swiss women.[9] As of 2000[update], there were 116 students in Allschwil who came from another municipality, while 650 residents attended schools outside the municipality.[17]

Allschwil is currently served by the following BVB and BLT Lines:

There are also some proposals to build a railway station on the SNCF Line from Basel to Mulhouse at Morgartenring (Basel). Even though the station would be located in Basel, it would serve Allschwil as well because it would be located only a couple of hundred meters away from the City Border.

Retrieved from "http://en.turkcewiki.org/w/index.php?title=Allschwil&oldid=941521268"
This website is a mirror of Wikipedia, and is not affiliated with the Wikimedia Foundation.
Categories:
Hidden categories: