Alexander Horsburgh Turnbull (14 September 1868 – 28 June 1918)[1] was a New Zealand merchant, dandy[2] and book collector. On his death, his collection became the nucleus of the Alexander Turnbull Collection, initially housed in his residence, Turnbull House, but as of 1987[update] housed with the collections of the National Library of New Zealand, a body formed in 1965 by the amalgamation of three libraries, including the one bearing Turnbull's name. In 1913, shortly before his death, Turnbull had presented his Māori and Pacific artefacts to the Dominion Museum (now the Museum of New Zealand Te Papa Tongarewa).[3]

Born in Wellington to Scottish merchant Walter Turnbull (1823–1897) and his wife Alexandrina Horsburgh (1827–1896), Turnbull grew up in Wellington but the family moved to London in 1881, where he attended Dulwich College. His brother Robert attended Wellington College, Berkshire. Two brothers Walter (born 1862) and William (born 1863) drowned in the River Tweed, Scotland on 1 September 1871.[4] He had three other siblings, Isabella Thornburn (born 1858), John Horsburgh (born 1860), and Joanna Elizabeth (born 1870).[5]

By the time he returned permanently to New Zealand in 1892, he was already collecting books. His particular interests were New Zealand, Pacific exploration, Scottish history, English literature, the art critic John Ruskin, and the poet John Milton. Turnbull had a standing order with the London bookseller Bernard Quaritch, which was regularly updated to include more subjects.

Turnbull also made a collection of New Zealand art, which he began by purchasing a group of watercolours of New Zealand flowers by Georgina Burne Hetley.[6]

He was buried alongside his parents, at Bolton Street Memorial Park, the oldest cemetery in Wellington but his remains and those of his family were later disinterred and moved into a common vault for the construction of the Wellington Urban Motorway. However, the headstone to the grave was shifted to a new location at the edge of the cemetery and it remains there as a memorial.[7] 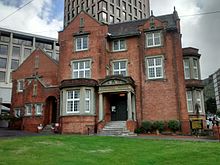 After his death, Turnbull's collection contained approximately 55,000 books, as well as manuscripts, photographs, paintings and sketches (the artefacts having already been given to the Dominion Museum). The collection is no longer housed in his purpose-built house (which is now in the care of Department of Conservation and is known as Turnbull House), but in the same building as the other collections held by the National Library. Turnbull's Milton collection continues to be added to, by purchase and donation; a number of significant additions were made in the 1970s.[8]

Retrieved from "http://en.turkcewiki.org/w/index.php?title=Alexander_Turnbull_(bibliophile)&oldid=962275371"
This website is a mirror of Wikipedia, and is not affiliated with the Wikimedia Foundation.
Categories:
Hidden categories: