Popov's work as a teacher at a Russian naval school led him to explore high frequency electrical phenomena. On May 7, 1895, he presented a paper on a wireless lightning detector he had built that worked via using a coherer to detect radio noise from lightning strikes. This day is celebrated in the Russian Federation as Radio Day. In a March 24, 1896 demonstration, he transmitted radio signals 250 meters between different campus buildings in St. Petersburg. His work was based on that of another physicist – Oliver Lodge, and contemporaneous with the work of Guglielmo Marconi.

Born in the town of Krasnoturinsk, Sverdlovsk Oblast in the Urals as the son of a priest, he became interested in natural sciences when he was a child. His father wanted Alexander to join the priesthood and sent him to the Seminary School at Yekaterinburg.[2] There he developed an interest in science and mathematics and instead of going on to Theology School in 1877 he enrolled at St. Petersburg university where he studied physics.[2][4] After graduation with honors in 1882, he stayed on as a laboratory assistant at the university. However the salary at the university was inadequate to support his family, and in 1883 he took a post as teacher and head of laboratory at the Russian Navy's Torpedo School in Kronstadt on Kotlin Island.[2] 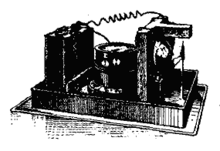 Along with his teaching duties at the naval school Popov pursued related areas of research. Trying to solve a problem with the failure in the electrical wire insulation on steel ships (which turned out to be a problem with electrical resonance) led him to further explore oscillations of high frequency electrical currents.[5] His interest in this area of study (including the new field of "Hertzian" or radio waves) was intensified by his trip in 1893 to the Chicago World's Columbian Exposition in the United States where he was able to confer with other researchers in the field.[6]

Popov also read an 1894 article about British physicist Oliver Lodge's experiments related to the discovery of radio waves by German physicist Heinrich Hertz 6 years earlier.[6] On 1 June 1894, after the death of Hertz, British physicist Oliver Lodge gave a memorial lecture on Hertz experiments. He set up a demonstration on the quasi optical nature of Hertzian waves (radio waves) and demonstrated their transmission at distances up to 50 meters.[7] Lodge used a detector called a coherer, a glass tube containing metal filings between two electrodes.[4] When received waves from an antenna were applied to the electrodes, the coherer became conductive allowing the current from a battery to pass through it, with the impulse being picked up by a mirror galvanometer. After receiving a signal, the metal filings in the coherer had to be reset by a manually operated vibrator or by the vibrations of a bell placed on the table nearby that rang every time a transmission was received.[7] Popov set to work to design a more sensitive radio wave receiver that could be used as a lightning detector, to warn of thunderstorms by detecting the electromagnetic pulses of lightning strikes[1] using a coherer receiver.[1][2] 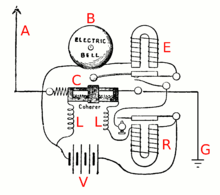 In Popov's lightning detector the coherer (C) was connected to an antenna (A), and to a separate circuit with a relay (R) and battery (V) which operated an electric bell (B). The radio noise generated by a lightning strike turned on the coherer, the current from the battery was applied to the relay, closing its contacts, which applied current to the electromagnet (E) of the bell, pulling the arm over to ring the bell. Popov added an innovative automatic reset feature of a "self tapping" coherer where the bell arm would spring back and tap the coherer, restoring it to its receptive state.[3] The two chokes (L) in the coherer's leads prevented the radio signal across the coherer from short circuiting by passing through the DC circuit. He connected his receiver to a wire antenna (A) suspended high in the air and to a ground (earth) (G). The antenna idea may have been based on a lightning rod and was an early use of a monopole wire aerial.[8]

On 7 May 1895, Popov presented the paper "On the Relation of Metallic Powders to Electric Oscillations", which described his lightning detector, to the Russian Physical and Chemical Society in St. Petersburg.[6] Most Eastern sources regard Popov's lightning detector as the first radio receiver,[9] and the 7th of May has been celebrated since 1945 in the Russian Federation as "Radio Day".[2] However, there is no evidence Popov sent any type of message on that occasion. The first account of communication by Popov was a demonstration on 24 March 1896 at the Physical and Chemical Society, when some accounts say the Morse code message "ГЕНРИХ ГЕРЦ" ("HEINRICH HERTZ" in Russian) was received from a transmitter 250 meters away and transcribed on the blackboard by the Society president.[2] Historian Charles Susskind in 1962 concluded that Popov did not use radio waves for actual wireless communication before mid-1896.[4]

In 1895 Italian inventor Guglielmo Marconi began work on a purpose built wireless telegraphy system based on "Hertzian" (radio) waves, developing a spark-gap transmitter and a much improved automatically-reset coherer receiver. By mid-1895 Marconi had transmitted messages 1/2 mile (800 meters). He then came up with the idea grounding his transmitter as well as his receiver and by mid-1896 he was transmitting radio messages a mile and a half (2400 meters).[10] Popov and Marconi's early work seems to have been done without knowledge of each other's system although reading Marconi's June 1896 patent disclosures led Popov to develop a long range wireless telegraphy system.[4] 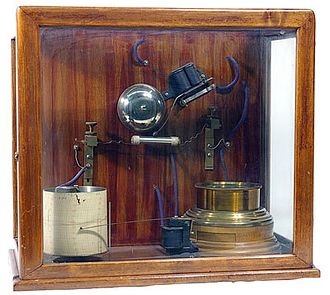 One of Popov's receivers, with chart recorder (white cylinder) to record lightning strikes

His paper on his experiments: "On the relation of metallic powders to electrical oscillations", was published 15 December 1895. He did not apply for a patent for his invention.[3] In July 1895 he installed his receiver and a siphon recorder on the roof of the Institute of Forestry building in St. Petersburg.[1] and was able to detect thunderstorms at a range of 50 km,[4] however he was also aware of its communication potential. His paper, read at the 7 May 1895 meeting, concluded[2][4]

I can express my hope that my apparatus will be applied for signaling at great distances by electric vibrations of high frequency, as soon as there will be invented a more powerful generator of such vibrations.

In 1896, the article depicting Popov's invention was reprinted in the 'Journal of the Russian Physical and Chemical Society'. In March 1896, he effected transmission of radio waves between different campus buildings in St. Petersburg. In November 1897, the French entrepreneur Eugene Ducretet made a transmitter and receiver based on wireless telegraphy in his own laboratory. According to Ducretet, he built his devices using Popov's lightning detector as a model. By 1898, Ducretet was manufacturing equipment of wireless telegraphy based on Popov's instructions. At the same time Popov effected ship-to-shore communication over a distance of 6 miles in 1898 and 30 miles in 1899.

In 1900 a radio station was established under Popov's instructions on Hogland island (Suursaari) to provide two-way communication by wireless telegraphy between the Russian naval base and the crew of the battleship General-Admiral Apraksin. The battleship had run aground on Hogland island in the Gulf of Finland in November 1899. The crew of the Apraksin were not in immediate danger, but the water in the Gulf began to freeze. Due to bad weather and bureaucratic red tape, the crew of Apraksin did not arrive until January 1900 to establish a wireless station on Hogland Island. By February 5, however, messages were being received reliably. The wireless messages were relayed to Hogland Island by a station some 25 miles away at Kymi (nowadays Kotka) on the Finnish coast. Kotka was selected as the location for the wireless relay station because it was the point closest to Hogland Island served by telegraph wires connected to Russian naval headquarters.[11]

By the time the Apraksin was freed from the rocks by the icebreaker Yermak at the end of April, 440 official telegraph messages had been handled by the Hogland Island wireless station. Besides the rescue of the Apraksin's crew, more than 50 Finnish fishermen, who were stranded on a piece of drift ice in the Gulf of Finland, were saved by the icebreaker Yermak following distress telegrams sent by wireless telegraphy.[citation needed] In 1901 Alexander Popov was appointed as professor at the Electrotechnical Institute, which now bears his name. In 1905 he was elected director of the institute.[citation needed]

In 1945 on the 50th anniversary of Popov's experiment the old Soviet Union made May 7th a new holiday, Radio Day, the day they claim Popov invented radio. Historians note this holiday may be more due to Cold War era politics than historical evidence.[13][1][3] Radio Day is still officially marked in Russia and Bulgaria.

A minor planet, 3074 Popov, discovered by Soviet astronomer Lyudmila Zhuravlyova in 1979, is named after him.[14] At ITU Telecom World 2011, Igor Shchyogolev, Minister of Telecom and Mass Communications of the Russian Federation alongside Hamadoun Touré, Secretary General of the ITU, inaugurated the "Alexander Stepanovich Popov" conference room at ITU's headquarters in Geneva.[citation needed] 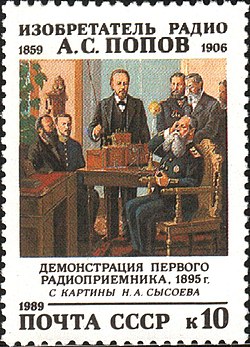 Books about A. S. Popov:

Films about A. S. Popov:

Alexander Popov (film) is a 1949 biographical film about the life and work of Alexander Stepanovich Popov.

Many stamps have been issued depict A.S.Popov bearing the honor of him inventing radio.

Some of his descendants escaped to Manchuria during the Bolshevik Revolution and eventually made their way to the United States. Among others were his cousin, Dr. Paul Popov, who became a prominent physician in San Francisco and Paul's son, Egor Popov (1913–2001), who became a UC Berkeley Professor Emeritus of Civil and Environmental Engineering.[19][20]

Retrieved from "http://en.turkcewiki.org/w/index.php?title=Alexander_Stepanovich_Popov&oldid=945118388"
This website is a mirror of Wikipedia, and is not affiliated with the Wikimedia Foundation.
Categories:
Hidden categories: