Jump to navigation Jump to search
For other uses, see Alcazaba (disambiguation). 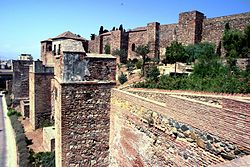 According to architect restorer, Leopoldo Torres Balbás, the Alcazaba of Málaga is the prototype of military architecture in the Taifa period, with its double walled and many fortifications. Its only parallel is the castle of Krak des Chevaliers in Syria.[1]

The word alcazaba should not be confused with alcázar (Spanish) and alcácer (Portuguese), which have their etymology in the Arabic al-qasr, which in turn derives from the Latin castrum, and denotes a fort or castle.

Retrieved from "http://en.turkcewiki.org/w/index.php?title=Alcazaba&oldid=902972696"
This website is a mirror of Wikipedia, and is not affiliated with the Wikimedia Foundation.
Categories:
Hidden categories: