The Akhshtyrskaya cave (Big Kazachebrodskaya) is a notable archeological site in the Western Caucasus. It is located on the right side of Akhshtyrskaya gorge of the Mzymta River near the Adlersky City District of Sochi, Krasnodar Krai, Russia. It was discovered in September 1903 by Edouard Martel and Gabriel Revinko, a resident of the nearby village of Kazachy Brod. The cave is named after the local village of Akhshtyr and the alternative name after the village of Kazachy Brod.

The cave received the status of "a unique monument of prehistoric architecture". In 1978 the entrance to the cave was closed and the hallway blocked by iron bars. In 1999 the cave became accessible to the public and is equipped with artificial lighting, stairs and steps.

The Akhshtyrskaya Cave was discovered in September 1903 by Édouard-Alfred Martel and Gabriel Revinko, a resident of the nearby village of Kazachy Brod. In 1936, archaeologist Sergei Nikolayevich Zamyatin excavated the first prehistoric human remains. From 1961 to 1965 excavations resumed by archaeologists MZ Panichkina and EA Vekilova. The stratigraphic sequence is about 5 meters thick and ranges from the Middle Paleolithic era to the early Medieval period. More recent excavations occurred from 1999 until 2008. In total, more than 6,000 bones were found - 92% of which belonged to the cave bear. In addition, there are the remains of deer, bison, goats, wolves, foxes and other animals. Humans - Neanderthals settled in the cave about 70,000 years ago. After a break of about 20,000 years the cave was populated by Cro-Magnon humans between 30,000 and 35,000 years ago. 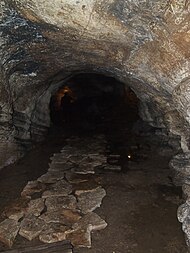 Excavation (2005): Level 3 M Mousterian. This level is associated with Neanderthal culture at about 40,000 BC. Some cave bear relics were found. Black spots inside the levels of the cave may be the result of fire usage for cooking and warming. Scientists also found tools: knives, spears and axes.

Photographs of the cave and immediate area

Retrieved from "http://en.turkcewiki.org/w/index.php?title=Akhshtyrskaya_Cave&oldid=929460951"
This website is a mirror of Wikipedia, and is not affiliated with the Wikimedia Foundation.
Categories:
Hidden categories: