Ajit Kumar Doval KC (born 20 January 1945) is a central civil servant of the IPS cadre serving as the fifth and the current National Security Advisor (NSA) to the Prime Minister of India, with the precedence equivalent to Cabinet Minister.[1][2] He previously served as the Director of the Intelligence Bureau in 2004–05, after spending a decade as the head of its operation wing.[3] He is a retired member of the Indian Police Service.[4]

Doval was born in 1945 in Ghiri Banelsyun village in Pauri Garhwal in the erstwhile United Provinces, now in Uttarakhand. Doval's father, Major G. N. Doval, was an officer in the Indian Army.[5][6][7]

He received his early education at the Ajmer Military School in Ajmer, Rajasthan.[8] He graduated with a master's degree in economics from the Agra University in 1967.[7] He has been awarded an honorary doctorate from Dr. Bhimrao Ambedkar University (formerly Agra University) in December 2017; Kumaun University in May 2018;[9][10] and Amity University, in November 2018.[11][12]

Doval joined the Indian Police Service in 1968 in the Kerala cadre as the ASP of Kottayam district.[13][14] He was posted in northeast India and Pakistan for seven years each.[15] He was actively involved in anti-insurgency operations in Punjab.[16]

Doval worked in Thalassery, Kerala, for a few months in 1972, before joining the central service.[17] He was one of three negotiators in the release of passengers from IC-814 in Kandahar in 1999.[18] He has the experience of being involved in the termination of all 15 hijackings of Indian Airlines aircraft from 1971 to 1999.[19] In the headquarters, he headed IB's operations wing for over a decade and was founder Chairman of the Multi Agency Centre (MAC), as well as of the Joint Task Force on Intelligence (JTFI).[20]

Ajit Doval played a role in intelligence for Sikkim's merger with India.[21][22] He was trained under M. K. Narayanan, the third National Security Advisor of India for a brief period in counterterrorism operations.[23] He was also part of the team sent to Kandahar to negotiate the release of the passengers of Indian Airlines IC-814.[21][24][25] He was later appointed as Director of the Intelligence Bureau.[25]

Doval retired in January 2005 as Director, Intelligence Bureau.[18] In December 2009, he became the founding Director of the Vivekananda International Foundation, a public policy think tank set up by the Vivekananda Kendra.[26][27] Doval has remained actively involved in the discourse on national security in India.[28][29] Besides writing editorial pieces for several leading newspapers and journals, he has delivered lectures on India's security challenges and foreign policy objectives at several renowned government and non-governmental institutions, security think-tanks in India and abroad.[30][31]

In 2009 and 2011 he co-wrote two reports on "Indian Black Money Abroad in Secret Banks and Tax Havens",[32] with others, leading in the field as a part of the task force constituted by BJP.[33] 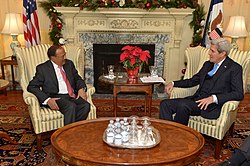 NSA Doval Meets with US Secretary John Kerry in Washington.

On 30 May 2014, Doval was appointed as India's fifth National Security Advisor. In June 2014, Doval facilitated the return of 46 Indian nurses who were trapped in a hospital in Tikrit, Iraq, following the capture of Mosul by ISIL. Doval, flew to Iraq on 25 June 2014 to understand the position on the ground and make high-level contacts in the Iraqi government.[36] Although the exact circumstances of their release are unclear, on 5 July 2014, ISIL militants handed the nurses to Kurdish authorities at Erbil city and an Air India plane specially-arranged by the Indian government brought them back home to Kochi.[37]

Along with Army Chief General Dalbir Singh Suhag, Doval planned an cross-border military operation against National Socialist Council of Nagaland (NSCN-K) separatists operating out of Myanmar. Indian officials claimed that the mission was a success and 20-38 separatist belonging to Nationalist Socialist Council of Nagaland (NSCN-K) were killed in the operation.[38][39][40][41] However, the Myanmar government denied the strikes. According to Myanmar officials, the Indian operation against NSCN-K took place entirely on the Indian side of the border.[42][43]

He is widely credited for the doctrinal shift in Indian national security policy in relation to Pakistan.[44] It was speculated that the September 2016 Indian strikes in Pakistan-controlled Kashmir were his brainchild.[45][46][47][48] Doval is widely credited along with then Foreign Secretary S. Jaishankar and Indian Ambassador to China Vijay Keshav Gokhale, for resolving Doklam Standoff through diplomatic channels and negotiations.[49][50][51]

In October 2018, he was appointed as the Chairman of the Strategic Policy Group (SPG), which is the first tier of a three tier structure at the National Security Council and forms the nucleus of its decision-making apparatus.[52]

Following the 2019 Balakot airstrike and retaliatory 2019 Jammu and Kashmir airstrikes and subsequent capture of Indian pilot Abhinandan Varthaman by Pakistani military, Ajit Doval had held talks with US Secretary of State and National Security Advisor to secure the release of the Indian pilot.[53]

On 3 June 2019, he was reappointed as NSA for 5 years and granted the personal rank of a Cabinet Minister.[54] Doval is the first NSA to hold such a rank. He was also an instrumental figure in revocation of the special status of Jammu and Kashmir.[55]

On 26, Feb 2020, Ajit Doval walked the streets of riot-hit northeast Delhi to assess the situation and reassure the local residents.[56]

On 15 May 2020, the military forces of Myanmar handed over a group of 22 militant leaders, active in Assam and other northeast states, to the Indian government. This was made possible through negotiations headed by Doval.[57][58]

On 15 September 2020, Doval walked out of a virtual SCO meeting after Pakistan projected a fictitious map omitting parts of India.[59]

Retrieved from "http://en.turkcewiki.org/w/index.php?title=Ajit_Doval&oldid=1095246683"
This website is a mirror of Wikipedia, and is not affiliated with the Wikimedia Foundation.
Categories:
Hidden categories: