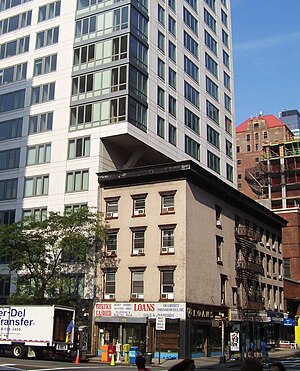 An example of air rights in use: a high-rise building extends over a four-story building in Manhattan

Air rights are the property interest in the "space" above the earth's surface. Generally speaking, owning, or renting, land or a building includes the right to use and develop the space above the land without interference by others.

This legal concept is encoded in the Latin phrase Cuius est solum, eius est usque ad coelum et ad inferos ("Whoever owns the soil, it is theirs up to Heaven and down to Hell."), which appears in medieval Roman law and is credited to 13th-century glossator Accursius; it was notably popularized in common law in Commentaries on the Laws of England (1766) by William Blackstone; see origins of phrase for details.

Property rights defined by points on the ground were once believed to extend indefinitely upward. This notion remained unchallenged before air travel became popular in the early 20th century. To promote air transport, legislators established a public easement for transit at high altitudes, regardless of real estate ownership.[1]

New technologies have again raised questions about ownership of "space" and the upward bounds of national sovereignty. With the advent of space travel above earth's atmosphere, the height at which national sovereignty extends and therefore nations can regulate transit is often debated. 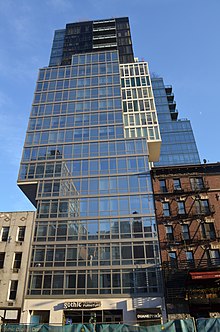 The exact altitude(s) at which the airspace over private land can become subject to "substantial impairment" is often debated. Case law in the past has used the height of 500 ft (150 m) in urban or suburban areas,[5] and 360 ft (110 m) above the surface or tallest structure in rural areas[6] as the demarcation of where impairment of property rights can occur. At those times this constituted the limits of "navigable airspace". However, the bulk of more recent decisions, which take precedent, hold that taking can occur regardless of if the flight occurred within navigable airspace or not and only impairment of property need be considered.[7] This is especially important as some aircraft (manned and unmanned) now have no minimum flight altitudes making virtually all airspace "navigable".

Financial compensation is owed property owners when the use of their property is substantially impaired by the federal government[8] or by state government,[9] or by the aerial trespasser.[10]

Congress has provided authority for the FAA to provide funds to purchase property interests in airspace (navigation easements) near airports to accommodate planes taking off and landing.[11]

The low cost of unmanned aerial vehicles (also called drones) in the 2000s re-raised legal questions regarding whose permission is required to fly at low altitudes: the landowner, the FAA, or both.[12] There has never been a direct challenge to the federal governments vesting of the right for citizens to travel through navigable airspace. As such, the status quo is only permission from the FAA (through regulation) is required. However, existing property rights over private property still allow for civil claims of taking when property use is "substantially impaired" by the use of the airspace.[13] The FAA has also reiterated that it has sole authority to regulate this right. [14]

Railroads were the first companies to realize the potential of making money from their air rights. A good example of this is Grand Central Terminal in New York City, where William J. Wilgus, chief engineer of the New York Central and Hudson River Railroad, devised a plan to earn profit from air rights. At first, the railroad simply constructed a platform above the rail yards to allow for the development of buildings overhead. By 1954, the railroad began to realize it could sell more air rights and Grand Central Terminal was proposed to be replaced by a 50-story tower. This is how the MetLife Building came to be built next to the station, after public protest regarding the demolition of Grand Central Terminal.[15] This approach has been used in Chicago since the construction of the Prudential Building in 1955 above active railroad tracks of the Illinois Central Railroad.[16] In 2017, to the west of the Chicago River, River Point and 150 North Riverside were built above tracks leading to the Amtrak station.

Building on platforms over railroad tracks is still potentially very profitable. In the mid-2000s, New York's Metropolitan Transportation Authority (MTA) attempted to sell air rights to the New York Jets so that they could build the West Side Stadium over Manhattan's West Side Yard, near Penn Station, as part of the Hudson Yards Redevelopment. The Hudson Yards mega-development was eventually built over the rail yard. In Brooklyn, the Barclays Center and Pacific Park have been constructed over Atlantic Yards.

Similar to railroads, builders of highways have proposed selling their air rights; Boston did this in connection with the Big Dig.[17]

The owner of the land has the exclusive development rights in the 'space' above his lands. Under common law, building a 'hangover' that breaks the vertical plane of a neighbor's property is a trespass and the property owner has the right to remove the offending structure. The airspace is property and retains developmental rights which can be sold or transferred. Thus in a dense downtown area, each building in the area may have the right to thirty-five stories of airspace above his own property. In one possible scenario, owners of an older building of only three stories high could make a great deal of money by selling their building and allowing a thirty-five-story skyscraper to be built in its place. In a different scenario, a skyscraper developer may purchase the unused airspace from an adjacent landowner in order to develop a broader building. In November 2005, Christ Church in New York sold its vertical development rights for a record $430 per square foot, making more than $30 million on the sale for the right to build in the space over its building.[19]

Retrieved from "http://en.turkcewiki.org/w/index.php?title=Air_rights&oldid=1018602601"
This website is a mirror of Wikipedia, and is not affiliated with the Wikimedia Foundation.
Categories: