Agriculture and aquaculture in Hong Kong

Agriculture and aquaculture in Hong Kong are considered sunset industries. Most agricultural produce is directly imported from the neighbouring mainland China. In 2006 the industry accounts for less than 0.3% of the labour sector.[1] Geographically Hong Kong consists largely of steep, unproductive hillside. The local aquaculture industry is also facing challenges from competition with imported aquatic food products and concern of fish and seafood safety.[2] 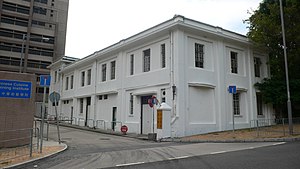 In the Colonial Hong Kong era around the 1850s, agriculture in Hong Kong consisted mostly of revenue farms that focused on opium productions. The industry led to many wealthy Chinese businessmen, who established themselves as the middlemen merchants with international connection. Some of the successful farmers included Yan Wo Hong and Wo Hang Hong from 1858 to 1887.[3] The system was discontinued by colonial authorities, when the economy needed to diversify in other activities. The last opium farm ended in 1913.[4] One of the farms founded in the era was Hong Kong Dairy Farm in 1886. As Hong Kong government favour the transition into a secondary sector, and eventually a tertiary sector, agriculture became a reduced segment.

Organic Farming was introduced in 1988.[5] An Accredited Farm Scheme for protecting the environment and consumers against residues of agricultural pesticides was introduced in 1994. Accredited farms strictly monitor and supervise the uses of pesticides, and produce are further analysed for chemical remnants before they are sold at accredited retail outlets. In 1994 the agriculture and fisheries industry represented 2.7% of the work force and just a mere 0.2% of the total GDP.[6]

Statistically, Hong Kong can only produce enough for 20% of the local population without depending on mainland imports.[6] In the mid-1990s, 50% of Hong Kong's water resources were still purchased from the mainland.[6] Hong Kong has always depended heavily on imports. The dependency on imports has increased steadily, since the ratio of population growth far exceed agricultural production numbers. In 2007, Hong Kong's population of almost 7 million[7] daily consumed the following.

Hong Kong's fishing activities are conducted mainly[citation needed] in the waters of the adjacent continental shelf in the South and East China Seas. They extend over a 160 kilometre wide section of this shelf between the Gulf of Tonkin and the East China Sea. The majority of the fishing vessels are manned by family members with the assistance of hired crew. Main fishing methods include trawling, long-lining, gill-netting and purse-seining with the majority of the total catch obtained through trawling.[12] The industry now consists of some 4,150 fishing vessels and some 9,200 fishermen working abroad and provides employment in ancillary sectors servicing the fishing industry, such as fish wholesale and retail marketing, fuel and fishing gear supply and ice manufacturing[12]

Some of the fish rafts had converted to recreation use. They are located in 11 out of 26 fish culture zones listed above.[14]

Aquaculture includes marine fish culture, pond fish culture and oyster culture. In 2005 production from the aquaculture sector was 3,725 tonnes valued at HK$120 million which was 2.2 per cent in weight and 6.7 per cent in value of the total fisheries production.[15] Data collected in 2012 shows the total amount of land occupied for Fish ponds total 1,130 hectares and are mainly located in north-western New Territories. About 990 licensees units are engaged in marine fish culture. Common species cultured include green grouper, brown-spotted grouper, Russell's snapper, mangrove snapper, cobia and pompano. Total marine fish culture production in 2012 amounted to 1 299 tonnes, valued at $117 million.[10]

The value of crop production amounted to $272 million in 2003. Vegetable and flower production account for about 97% of the total value, being $264 million in 2003. Vegetable crops grown all year round include white cabbage, flowering cabbage, lettuce, Chinese kale, radish, leaf mustard, spring onion and chive. Spinach, watercress, and matrimony vine are produced in the cooler months. Yardlong beans, water spinach, amaranth, cucumber, and several species of Chinese gourd are produced in summer. A wide range of temperate vegetables including tomato, sweet pepper, cauliflower, carrot, and celery are grown in winter.

Flower cultivation has gained importance in recent years. Gladiolus, lily, and chrysanthemum are grown in winter; and ginger lily and lotus flower in summer. Peach blossom is grown especially for the Lunar New Year. A wide range of fruit is grown on the lower hill slopes, the main types being lychee, longan, wampei,[what language is this?] local lemon, orange, tangerine, guava, papaya and banana.

There were 281 local pig farms and 205 local poultry farms in 2004. During 2003, local pig production was valued at $527 million and local poultry production, including pigeons and eggs was valued at $250 million. Pigs raised on local farms are crosses derived from Duroc, Landrace and Large White parent stock. The majority of local chickens raised on farms are Shek Ki cross bred chickens. Recently, brand name chickens like Ka Mei chickens and Tai on chickens have been introduced to local market by local investors. There are two dairies in active operation with a total herd population of less than 50 cows.

The commercially important marine species are bigeye, golden thread, croaker, horse-head and pomfret. The total capture fisheries and marine fish culture production is equivalent to about 31% of seafood consumed in Hong Kong, while pond fish farmers produce about 6% of the freshwater fish eaten. The majority of fish farms in New Territories are engaged in carp polyculture (bighead carp, silver carp, common carp and grass carp) in combination with tilapia or grey mullet as the major species. Other cultured species include seabreams and spotted scat. At present there are 26 fish culture zones designated under the "Marine Fish Culture Ordinance". Common species cultured include green grouper, brownspotted grouper, Russell's snapper, mangrove snapper, cobia and pompano. The voluntary "Accredited Fish Farm Scheme" has been launched to assist local fish farmers.[2]

The Agriculture, Fisheries and Conservation Department and its closely related marketing organisations provide infrastructural support and technical services to the various primary industries. The department's crop specialists undertake studies into practical problems in pest control, crop husbandry and soil management. They also investigate specific production technologies to enhance the efficiency and economic benefits of the industry. This work is carried out in an experimental station in Sheung Shui and results are made available to farmers by the department's advisory service. 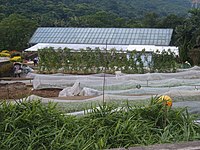 Loans issued to farmers in 2003 amounted to $19 million and the total value of loans issued up to 31 December 2003 (under three separate loan funds administered by the Agriculture, Fisheries and Conservation Department was $505 million. These loans are granted to cover farm production and development purposes.

Retrieved from "http://en.turkcewiki.org/w/index.php?title=Agriculture_and_aquaculture_in_Hong_Kong&oldid=962164326"
This website is a mirror of Wikipedia, and is not affiliated with the Wikimedia Foundation.
Categories:
Hidden categories: