Jump to navigation Jump to search
Academic field within biology

Agricultural science is a broad multidisciplinary field of biology that encompasses the parts of exact, natural, economic and social sciences that are used in the practice and understanding of agriculture. (Veterinary science, but not animal science, is often excluded from the definition.)

The three terms are often confused. However, they cover different concepts:

Agricultural sciences include research and development on:[1][2]

Agricultural biotechnology is a specific area of agricultural science involving the use of scientific tools and techniques, including genetic engineering, molecular markers, molecular diagnostics, vaccines, and tissue culture, to modify living organisms: plants, animals, and microorganisms.[3]

One of the most common yield reducers is because of fertilizer not being applied in slightly higher quantities during transition period, the time it takes the soil to rebuild its aggregates and organic matter. Yields will decrease temporarily because of nitrogen being immobilized in the crop residue, which can take a few months to several years to decompose, depending on the crop's C to N ratio and the local environment.

In the 18th century, Johann Friedrich Mayer conducted experiments on the use of gypsum (hydrated calcium sulphate) as a fertilizer.[4]

In 1843, John Lawes and Joseph Henry Gilbert began a set of long-term field experiments at Rothamsted Research Station in England, some of which are still running as of 2018.[5]

In the United States, a scientific revolution in agriculture began with the Hatch Act of 1887, which used the term "agricultural science". The Hatch Act was driven by farmers' interest in knowing the constituents of early artificial fertilizer. The Smith-Hughes Act of 1917 shifted agricultural education back to its vocational roots, but the scientific foundation had been built.[6] After 1906, public expenditures on agricultural research in the US exceeded private expenditures for the next 44 years.[7]:xxi 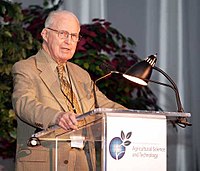 Retrieved from "http://en.turkcewiki.org/w/index.php?title=Agricultural_science&oldid=966785715"
This website is a mirror of Wikipedia, and is not affiliated with the Wikimedia Foundation.
Categories:
Hidden categories: