The term Advanced IRB or A-IRB is an abbreviation of advanced internal ratings-based approach, and it refers to a set of credit risk measurement techniques proposed under Basel II capital adequacy rules for banking institutions.

Under this approach the banks are allowed to develop their own empirical model to quantify required capital for credit risk. Banks can use this approach only subject to approval from their local regulators.

Under A-IRB banks are supposed to use their own quantitative models to estimate PD (probability of default), EAD (exposure at default), LGD (loss given default) and other parameters required for calculating the RWA (risk-weighted asset). Then total required capital is calculated as a fixed percentage of the estimated RWA.

Banks can determine their own estimation for some components of risk measure: the probability of default (PD), loss given default (LGD), exposure at default (EAD) and effective maturity (M). For public companies, default probabilities are commonly estimated using either the "structural model" of credit risk proposed by Robert Merton (1974) or reduced form models like the Jarrow-Turnbull model. For retail and unlisted company exposures, default probabilities are estimated using credit scoring or logistic regression, both of which are closely linked to the reduced form approach.

The goal is to define risk weights by determining the cut-off points between and within areas of the expected loss (EL) and the unexpected loss (UL), where the regulatory capital should be held, in the probability of default. Then, the risk weights for individual exposures are calculated based on the function provided by Basel II. 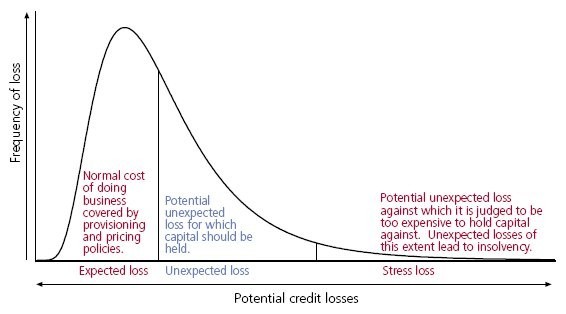 In the formulas below,

The exposure for corporate loans is calculated as follows[1]

AVC[2] (Asset Value Correlation) was introduced by the Basel III Framework, and is applied as following :

For small and medium enterprises with annual Sales Turnover below 50 million euro, the correlation may be adjusted as follows:[3]

In the above formula, S is the enterprise's annual sales turnover in millions of euro.

The exposure related to unsecured retail credit products can be calculated as follows:[5] 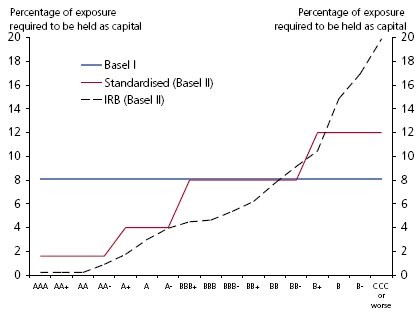 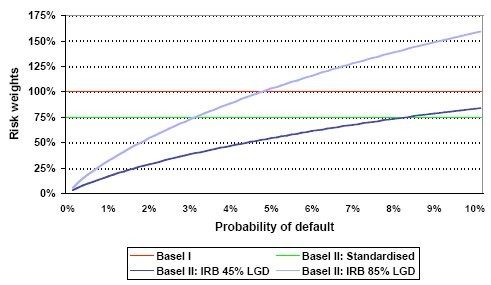 Retrieved from "http://en.turkcewiki.org/w/index.php?title=Advanced_IRB&oldid=936311080"
This website is a mirror of Wikipedia, and is not affiliated with the Wikimedia Foundation.
Categories: