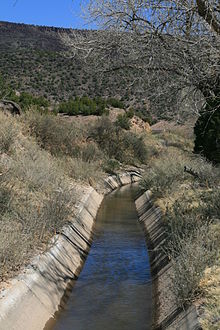 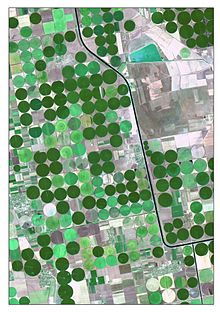 The picture is satellite image of irrigated crops and Kahov irrigation canal. It is captured 7-Aug 2015 by Landsat 8 (OLI). The image is created as True Color Composite. This band combination is suitable for crop monitoring. For emphasizing characteristics, the image was pan-sharpened by panchromatic band. Nonlinear adaptive procedure of contrasting was applied too.

An acequia (Spanish: [aˈθekja]) or séquia (Valencian: [ˈsɛkia]) is a community-operated watercourse used in Spain and former Spanish colonies in the Americas for irrigation. Particularly in Spain, the Andes, northern Mexico, and the modern-day American Southwest particularly northern New Mexico and southern Colorado, acequias are usually historically engineered canals that carry snow runoff or river water to distant fields. Examples of acequias in New Mexico have lengthy historical roots to Pueblo and Hispano communities, and they are incorporated into traditions including the matachines, life in the Rio Grande Bosque of the Albuquerque metropolitan area, and pilgrimages to El Santuario de Chimayo.

The term can also refer to the long central pool in a Moorish garden, such as the Generalife in the Alhambra in Southern Iberia.

The Spanish word acequia (and Catalan séquia) comes from Classical Arabic as-sāqiya, which has the double meaning of 'the water conduit' or 'one that bears water' and the 'barmaid' (from ‏سَقَى‎ saqā, 'to give water, drink'). The Arabs brought the technology to Iberia during their occupation of the Iberian peninsula. The technology was adopted later by the Spanish and Portuguese (levadas on Madeira Island), utilized throughout their conquered lands, except in e.g. Mendoza o San Juan, Argentina where acequias today run along both sides of all city streets but originally were dug all around by the indigenous Huarpes long before the arrival of the Spanish.

In the United States, the oldest acequias were established more than 400 years ago; many continue to provide a primary source of water for farming and ranching ventures in areas of the United States once occupied by Spain or Mexico including the region of northern New Mexico and south central Colorado known as the Upper Rio Grande watershed or Rio Arriba (see Rivera 1998).

Acequias are gravity chutes, similar in concept to flumes. Some acequias are conveyed through pipes or aqueducts, of modern fabrication or decades or centuries old (see transvasement). The majority, however, are simple open ditches with dirt banks. In many communities, the ditchbanks are important routes for non-motorized travel.

Researchers affiliated with the Rio Grande Bioregions Project at Colorado College initiated a pioneering collaborative, farmer-led, and interdisciplinary study of Colorado and New Mexico acequias in 1995-1999. Among the most significant findings of this study was that the acequia farms provide vital ecosystem and economic base services to the regions in which they are located. One study, as reported in Peña (2003), found that acequia agroecosystems promote soil conservation and soil formation, provide terrestrial wildlife habitat and movement corridors; protect water quality and fish habitat, promote the conservation of domesticated biodiversity of land race heirloom crops, and encourage the maintenance of a strong land and water ethic and sense of place, among other ecological and economic base values. This pioneering research on acequia ecosystem services, led by environmental anthropologist Devon G. Peña, has more recently been confirmed in other studies (Fernald et al., 2007, 2010, 2015; Raheem et al., 2015).

Known among water users simply as the Acequia, various legal entities embody the community associations, or acequia associations, that govern members' water usage, depending on local precedents and traditions. An acequia organization often must include commissioners and a majordomo who administers usage of water from a ditch, regulating which holders of water rights can release water to their fields on which days. In New Mexico, by state statute, acequias as registered bodies must have three commissioners and a mayordomo (see Rivera, 1998, pp. 59–60). Irrigation and conservation districts typically have their own version of mayordomos, usually referred to as "ditch riders" by members of the districts. 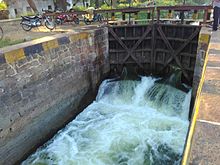 In recent years, acequias in New Mexico and Colorado have successfully developed and implemented changes in state water laws to accommodate the unique norms, customs, and practices of the acequia systems. The customary law of the acequia is older than and at variance with the Doctrine of Prior Appropriation, and the statutes promulgating acequia water law represent a rare instance of water pluralism in the context of Western water law in the United States (see Hicks and Peña 2003). For example, the Doctrine of Prior Appropriation is based on the principle of "first in use, first in right," while acequia norms incorporate not just priority but principles of equity and fairness. This is evident in the fact that Prior Appropriation considers water to be a commodity owned by private individuals while acequia systems treat water as a community resource that irrigators have a shared right to use, manage, and protect. While Prior doctrines allow for water to be sold away from the basin of origin, the acequia system prohibits the transference of water from the watershed in which it is situated and thus considers water as an "asset-in-place". The Prior regime is based on a governance regime in which the members of a mutual ditch company will vote based on their proportional ownership of shares so that larger farmers have more votes. In contrast, the acequia system follows a "one farmer, one vote" system that has led researchers to consider this a form of "water democracy" (see Rivera 1998; Peña 2003). Acequia water law also requires that all persons with irrigation rights participate in the annual maintenance of the community ditch including the annual spring time ditch cleanup known as the limpieza y saca de acequia.

Small hydro can be installed in irrigation canals for electricity generation.[1] "Irrigation districts across the U.S. have installed power plants at diversion points and in-canal drops, which are traditionally used for flow measurement, to stabilize upstream heads and to dissipate energy where there is significant elevation change throughout the canal system."[2]

Retrieved from "http://en.turkcewiki.org/w/index.php?title=Acequia&oldid=984204584"
This website is a mirror of Wikipedia, and is not affiliated with the Wikimedia Foundation.
Categories:
Hidden categories: