Aaigem is a village belonging to the municipality of Erpe-Mere. It is located in the province of East Flanders, Belgium. The village has some 2000 inhabitants. Aaigem was an independent municipality with an area of 7.32 square kilometers till 1976.

Aaigem is located north of the Flemish Ardennes, a hilly region, and is also a part of the Denderstreek. The village is situated on the north of the valley of Molenbeek-Ter Erpenbeek, a brook passing south of the village centre. Since the valley is characterized by low wet land, construction development is rather limited there.

Etymologically, Flemish toponyms ending with –gem refer to a Germanic compound of –haim, meaning ‘home’ or ‘residence’, and a derivative ending –inga. The first part of the name "Aaigem" is commonly assigned to the Germanic name of Ago, a currently unknown person. In its totality, the compound Agingahaim meant ‘residence of the followers or tribal members of Ago’. Gem-toponyms are typical for the period of Frankish settlement during the Merovingian era, though nothing is known about the village of Aaigem at that time, with the earliest records about the Aaigem dating back to the 11th century.

The territory of Aaigem might have belonged to the Abbey of Saint Peter or the Abbey of Saint Bavo in Ghent before the forays of the Norsemen. From around 1100, the church of Aaigem was property of the Anchin Abbey (in Pecquencourt, near Douai in northern France). This abbey held much of the land in Aaigem till the French Revolution. Agriculture remained the main source of income throughout the 20th century. However, some industrial activity, such as water mill operation, have taken place. The limited rural industry that came into existence in the 19th and 20th century, such as a number of local dairy farms, have not survived.

In the feudal period Aaigem belonged to the Land of Aalst, and within this area, it was part of the Land of Haaltert, later also called Land of Rotselaar, in reference to the Lords of Rotselaar, who remained liege of this fief for generations.[when?]

Aaigem is one of the few villages in Flanders with a preserved Frankish village green (Dutch: dries), located about 1 kilometer east from the present village center. 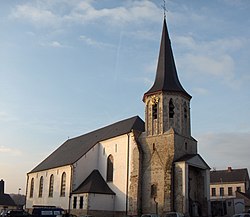 Most of the Saint-Nicolas Church (in full: Saint-Nicolas- and Saint-Leonard Church) was built in 1786, and replaced a smaller Gothic church, of which only the tower of ca. 1300 remains, at the back of the current church building. This tower was the crossing tower of the old church. Traces of the roof, of the side aisles and of the choir are still visible on the tower. The 18th century construction is neoclassical, and built according to the plans of architect F. Drieghe, who was also responsible for the construction of the Saint-Christopher Church in Evergem.

The football club SK Aaigem plays in Aaigem, and is active in the third provincial league of the province of East Flanders. 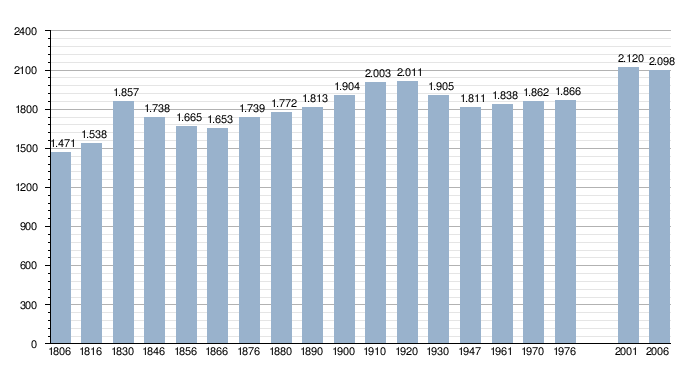 Retrieved from "http://en.turkcewiki.org/w/index.php?title=Aaigem&oldid=945447061"
This website is a mirror of Wikipedia, and is not affiliated with the Wikimedia Foundation.
Categories:
Hidden categories: