AES3 (also known as AES/EBU) is a standard for the exchange of digital audio signals between professional audio devices. An AES3 signal can carry two channels of PCM audio over several transmission media including balanced lines, unbalanced lines, and optical fiber.[1]

AES3 was jointly developed by the Audio Engineering Society (AES) and the European Broadcasting Union (EBU). The standard was first published in 1985 and was revised in 1992 and 2003. AES3 has been incorporated into the International Electrotechnical Commission's standard IEC 60958, and is available in a consumer-grade variant known as S/PDIF.

The development of standards for digital audio interconnect for both professional and domestic audio equipment, began in the late 1970s[2] in a joint effort between the Audio Engineering Society and the European Broadcasting Union, and culminated in the publishing of AES3 in 1985. The AES3 standard has been revised in 1992 and 2003 and is published in AES and EBU versions.[1] Early on, the standard was frequently known as AES/EBU.

Variants using different physical connections are specified in IEC 60958. These are essentially consumer versions of AES3 for use within the domestic high fidelity environment using connectors more commonly found in the consumer market. These variants are commonly known as S/PDIF.

The AES3 standard parallels part 4 of the international standard IEC 60958. Of the physical interconnection types defined by IEC 60958, two are in common use.

Type I connections use balanced, 3-conductor, 110-ohm twisted pair cabling with XLR connectors. Type I connections are most often used in professional installations and are considered the standard connector for AES3. The hardware interface is usually implemented using RS-422 line drivers and receivers.

IEC 60958 Type II defines an unbalanced electrical or optical interface for consumer electronics applications. The precursor of the IEC 60958 Type II specification was the Sony/Philips Digital Interface, or S/PDIF. Both were based on the original AES/EBU work. S/PDIF and AES3 are interchangeable at the protocol level, but at the physical level they specify different electrical signaling levels and impedances, which may be significant in some applications. 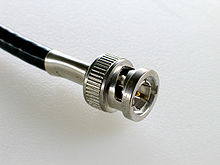 AES/EBU can also be run using unbalanced BNC connectors a with a 75-ohm coaxial cable. The unbalanced version has a maximum transmission distance of 1000 meters as opposed to the 100 meters maximum for the balanced version. The AES-3id standard defines a 75-ohm BNC electrical variant of AES3. This uses the same cabling, patching and infrastructure as analogue or digital video, and is thus common in the broadcast industry.

AES3 digital audio format can also be carried over an Asynchronous Transfer Mode network. The standard for packing AES3 frames into ATM cells is AES47. AES67 described digital audio transport over an IP network but does not include any of the ancillary data associated with AES3. A mechanism for carrying this additional data is described in SMPTE 2110-31.

For information on the synchronization of digital audio structures, see the AES11 standard. The ability to insert unique identifiers into an AES3 bit stream is covered by the AES52 standard. 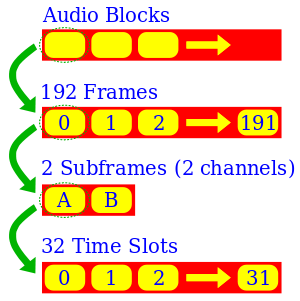 Simple representation of the protocol for both AES3 and S/PDIF

The low-level protocol for data transmission in AES3 and S/PDIF is largely identical, and the following discussion applies for S/PDIF, except as noted.

AES3 was designed primarily to support stereo PCM encoded audio in either DAT format at 48 kHz or CD format at 44.1 kHz. No attempt was made to use a carrier able to support both rates; instead, AES3 allows the data to be run at any rate, and encoding the clock and the data together using biphase mark code (BMC).

Each bit occupies one time slot. Each audio sample (of up to 24 bits) is combined with four flag bits and a synchronisation preamble which is four time slots long to make a subframe of 32 time slots. The 32 time slots of each subframe are assigned as follows:

Two subframes (A and B, normally used for left and right audio channels) make a frame. Frames contain 64 bit periods and are produced once per audio sample period. At the highest level, each 192 consecutive frames are grouped into an audio block. While samples repeat each frame time, metadata is only transmitted once per audio block. At 48 kHz sample rate, there are 250 audio blocks per second, and 3,072,000 time slots per second supported by a 6.144 MHz biphase clock.[3]

This is a specially coded preamble that identify the subframe and its position within the audio block. They are not normal BMC-encoded data bits, although they do still have zero DC bias.

In two-channel AES3, the preambles form a pattern of ZYXYXYXY…, but it is straightforward to extend this structure to additional channels (more subframes per frame), each with a Y preamble, as is done in the MADI protocol.

SMPTE timecode timestamp data can be embedded within AES3 digital audio signals. It can be used for synchronization and for logging and identifying audio content. According to John Ratcliff's Timecode: A user's guide, it is embedded as a 32-bit binary word in bytes 18 to 21 of the channel status data.[5]

Retrieved from "http://en.turkcewiki.org/w/index.php?title=AES3&oldid=939852660"
This website is a mirror of Wikipedia, and is not affiliated with the Wikimedia Foundation.
Categories:
Hidden categories: