In the United States, an ABA routing transit number (ABA RTN) is a nine-digit code printed on the bottom of checks to identify the financial institution on which it was drawn. The American Bankers Association (ABA) developed the system in 1910[1] to facilitate the sorting, bundling, and delivering paper checks to the drawer's (check writer's) bank for debit to the drawer's account.

Since 1911, the American Bankers Association has partnered with a series of registrars, currently Accuity, to manage the ABA routing number system.[2] Accuity is the Official Routing Number Registrar and is responsible for assigning ABA RTNs and managing the ABA RTN system. Accuity publishes the American Bankers Association Key to Routing Numbers semi-annually. The "Key Book" contains the listing of all ABA RTNs that have been assigned.

ABA RTNs are only for use in payment transactions within the United States. They are used on paper check, wire transfers, and ACH transactions. On a paper check, the ABA RTN is usually the middle set of nine numbers printed at the bottom of the check. Domestic transfers that use the ABA RTN will usually be returned to the paying bank.

Incoming international wire transfers also use a BIC code, also known as a SWIFT code, as they are administered by the Society for Worldwide Interbank Financial Telecommunication (SWIFT) and defined by ISO 9362. In addition, many international financial institutions use an IBAN code.

The IBAN was originally developed to facilitate payments within the European Union but the format is flexible enough to be applied globally. It consists of an ISO 3166-1 alpha-2 country code, followed by two check digits that are calculated using a mod-97 technique, and Basic Bank Account Number (BBAN) with up to thirty alphanumeric characters. The BBAN includes the domestic bank account number and potentially routing information. The national banking communities decide individually on a fixed length for all BBAN in their country. 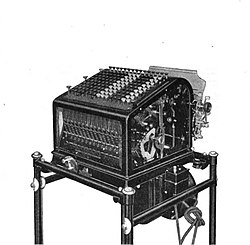 In 1911 the new Burroughs Transit Machine, made by the Burroughs Adding Machine Company, was advertised in the first edition of the bank directory Key to Numerical System of the American Bankers' Association.[4]

The bank numbers in the United States were originated by the American Bankers Association (ABA) in 1911. Banks had been disagreeing on identification. The ABA arranged a meeting of clearing house managers in Chicago in December 1910. The gathering chose a committee to assign each bank in the country convenient numbers to use. In May 1911, the American Bankers Association released the codes.[5] The numerical committee was W. G. Schroeder, C. R. McKay, and J. A. Walker.[6] The publisher of the new directory was Rand-McNally and Company.[7] The ABA clearing house codes are like the sub-headings in a decimal outline. The prefixes mean locations and the suffixes banking firms within those locations. Half of the prefixes represent major cities the other half represent regions of the United States. Lower prefixes are used for higher populations, first based on the 1910 U. S. Census. Likewise, within each prefix area banks are numbered in order of city population and bank seniority, although single-bank towns are numbered in alphabetical order. When a new bank is being organized, the current publisher of the directory of banks assigns it a transit code.[8] The American Bankers Association asked banks to use the directory exclusively so banks would agree on how to sort checks.[9] The book was abbreviated Key to Numerical System of The American Bankers Association, and as the Key. It was published by Rand McNally & Co.[10] In 1952 by Rand McNally moved its corporate headquarters to Skokie, Illinois, and became more interested in publishing maps.[11] Also in Skokie is a company called Accuity, which from its history has been the official registrar of ABA bank numbers since 1911. By 2014 it was the publisher of the semi-annual ABA Key to Routing Numbers and was owned by Reed Business Information, British publisher of reference works for professionals, which in turn is owned by Reed-Elsevier, English-Dutch publisher of online format reference works for professionals.[12][13] Over the years the ABA's identification numbers for banks accommodated the Federal Reserve Act, the Expedited Funds Act and the Check 21 Act. By 2014 the Key included the U. S. Federal Reserve's nine-digit magnetic-ink routing numbers.[14]

The ABA RTN appears in two forms on a standard check – the fraction form and the MICR (magnetic ink character recognition) form.[15] Both forms give essentially the same information, though there are slight differences.

The MICR forms are the main form – it is printed in magnetic ink, and is machine-readable; it appears at the bottom left of a check, and consists of nine digits.

They are made up of 9 digits and are sometimes called Routing Transit Numbers, ABA Route Numbers, or RTNs.

The fraction form was used for manual processing before the invention of the MICR line, and still serves as a backup in check processing should the MICR line become illegible or torn; it generally appears in the upper right part of a check near the date.

The MICR number is of the form

where XXXX is Federal Reserve Routing Symbol, YYYY is ABA Institution Identifier, and C is the Check Digit, while the fraction is of the form:

where PP is a 1 or 2 digit Prefix, no longer used in processing, but still printed, representing the bank's check processing center location, with 1 through 49 for processing centers located in a major city, and 50 through 99 representing processing is done at a non-major city in a particular state. Sometimes a branch number or the account number are printed below the fraction form; branch number is not used in processing, while the account number is listed in MICR form at the bottom. Further, the Federal Reserve Routing Symbol and ABA Institution Identifier may have fewer than 4 digits in the fraction form. The essential data, shared by both forms, is the Federal Reserve Routing Symbol (XXXX), and the ABA Institution Identifier (YYYY), and these are usually the same in both the fraction form and the MICR, with only the order and format switched (and left-padded with 0s to ensure that they are 4 digits long).

In the case of a MICR line that is illegible or torn, the check can still be processed without the check digit. Typically, a repair strip or sleeve is attached to the check, then a new MICR line is imprinted. Either 021200025 or 0212-0002 (with a hyphen, but no check digit) may be printed, and both are 9 digits. The former (with check digit) is preferred to ensure better accuracy, but requires computing the check digit, while the latter is easily determined by inspection of the fraction, with minimal clerical handling.

where XXXX is Federal Reserve Routing Symbol, YYYY is ABA Institution Identifier, and C is the Check Digit.

The digits are assigned as follows:

The first two digits correspond to the 12 Federal Reserve Banks as follows:

The third digit corresponds to the Federal Reserve check processing center originally assigned to the bank.[16]

The fifth through eighth digits constitute the bank's unique ABA identity within the given Federal Reserve district.[16]

The ninth, check digit provides a checksum test using a position-weighted sum of each of the digits. High-speed check-sorting equipment will typically verify the checksum and if it fails, route the item to a reject pocket for manual examination, repair, and re-sorting. Mis-routings to an incorrect bank are thus greatly reduced.

The following condition must hold:[15]

(Mod or modulo is the remainder of a division operation.)

In terms of weights, this is 371 371 371. This allows one to catch any single-digit error (incorrectly inputting one digit), together with most transposition errors. 1, 3, and 7 are used because they (together with 9) are coprime to 10; using a coefficient that is divisible by 2 or 5 would lose information (because

), and thus would not catch some substitution errors. These do not catch transpositions of two digits that differ by 5 (0 and 5, 1 and 6, 2 and 7, 3 and 8, 4 and 9), but captures other transposition errors.[citation needed]

As an example, consider 111000025 (which is a valid routing number of Bank of America in Virginia). Applying the formula, we get:

The symbol that delimits a routing transit number is the MICR E-13B transit character ⑆ This character, with Unicode value U+2446, appears at right.

The fraction form looks like a fraction, with a numerator and a denominator.

The numerator consists of two parts separated by a dash. The prefix (no longer used in check processing, yet still printed on most checks) is a 1 or 2 digit code (P or PP) indicating the region where the bank is located. The numbers 1 to 49 are cities, assigned by size of the cities in 1910. The numbers 50 to 99 are states, assigned in a rough spatial geographic order, and are used for banks located outside one of the 49 numbered cities.

The second part of the numerator (after the dash) is the bank's ABA Institution Identifier, which also forms digits 5 to 8 of the nine digit routing number (YYYY).

There might also be a fourth element printed to the right of the fraction: this is the bank's branch number. It is not included in the MICR line. It would only be used internally by the bank, e.g. to show where the signature card is located, where to contact the responsible officer in case of an overdraft, etc.

This table is up to date as of 2020. One weakness of the current routing table arrangement is that various territories like American Samoa, Guam, Puerto Rico and the US Virgin Islands share the same routing code.

Retrieved from "http://en.turkcewiki.org/w/index.php?title=ABA_routing_transit_number&oldid=967636985"
This website is a mirror of Wikipedia, and is not affiliated with the Wikimedia Foundation.
Categories:
Hidden categories: