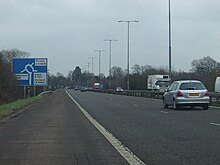 The proposed route of the M4 was then changed to go south of Reading, instead of north of it.[4] When the M4 was extended in 1971,[2] a new junction was provided to connect with what would become a spur. This new interchange was built too close to the original junction 8, so this had to be closed. A new junction (numbered 8/9 so as not to confuse motorists) was built. The original M4 north of this was renumbered as the A423(M) and in the 1990s this was again reclassified as the A404(M). A new spur, the A308(M), was built to maintain access to the A308 and connected with the A404(M) and the M4 at the same grade separated roundabout.

Template:Attached KML/A308(M) motorway
KML is from Wikidata
Retrieved from "http://en.turkcewiki.org/w/index.php?title=A308(M)_motorway&oldid=875773628"
This website is a mirror of Wikipedia, and is not affiliated with the Wikimedia Foundation.
Categories:
Hidden categories: