The 955 AES is now headquartered at Al Udeid, AB, Qatar after having come Over the Horizon from Bagram Airfield (BAF) as part of a tactical realignment of Afghanistan. BAF is a militarized airport and housing complex located next to the ancient mile-high city of Bagram in the Parwan Province of Afghanistan. The base is run by an Army division headed by a two-star general. All the Joint Expeditionary Tasked (JET) and Individual Augmenteer (IA) Airmen assigned to Northern and Eastern Afghanistan are ADCON to the 955 AES. This includes over 510 Airmen at BAF and 400 more at 70 combat outposts and bases.

The "Air" in Airpower represents Airman, not just aircraft. Airmen are an important part of the Air Force's contribution to the Joint mission in Afghanistan. The Air Force has delegated Tactical Control (TACON) over some of its Airmen in critical support billets to a Joint supervisor who may be from any branch of military service. But the Air Force retains ADCON over its Airmen. The Air Force lends its Airmen's skills, talents and temporary service to the Joint team, but Airmen still work for an Air Force Squadron: the 966AES is that squadron for those Airmen in Regional Command-East and Regional Command-North. 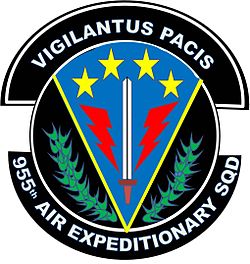 Retrieved from "http://en.turkcewiki.org/w/index.php?title=955th_Air_Expeditionary_Squadron&oldid=962448068"
This website is a mirror of Wikipedia, and is not affiliated with the Wikimedia Foundation.
Categories:
Hidden categories: