7 (seven) is the natural number following 6 and preceding 8. It is the only prime number preceding a cube. It is often considered lucky in Western culture and is often seen as highly symbolic. Unlike Western culture, in Vietnamese culture, the number seven is sometimes considered unlucky.

It is the first number whose pronunciation contains more than one syllable, not counting 0.

Evolution of the Arabic digit

In the beginning, Indians wrote 7 more or less in one stroke as a curve that looks like an uppercase ⟨J⟩ vertically inverted. The western Ghubar Arabs' main contribution was to make the longer line diagonal rather than straight, though they showed some tendencies to making the digit more rectilinear. The eastern Arabs developed the digit from a form that looked something like our 6 to one that looked like an uppercase V. Both modern Arab forms influenced the European form, a two-stroke form consisting of a horizontal upper stroke joined at its right to a stroke going down to the bottom left corner, a line that is slightly curved in some font variants. As is the case with the European digit, the Cham and Khmer digit for 7 also evolved to look like their digit 1, though in a different way, so they were also concerned with making their 7 more different. For the Khmer this often involved adding a horizontal line to the top of the digit.[1] This is analogous to the horizontal stroke through the middle that is sometimes used in handwriting in the Western world but which is almost never used in computer fonts. This horizontal stroke is, however, important to distinguish the glyph for seven from the glyph for one in writing that uses a long upstroke in the glyph for 1. In some Greek dialects of early 12th century the longer line diagonal was drawn in a rather semicircular transverse line.

While the shape of the character for the digit 7 has an ascender in most modern typefaces, in typefaces with text figures the character usually has a descender, as, for example, in

Most people in Continental Europe,[2] and some in Britain and Ireland as well as Latin America, write 7 with a line in the middle ("7"), sometimes with the top line crooked. The line through the middle is useful to clearly differentiate the digit from the digit one, as the two can appear similar when written in certain styles of handwriting. This form is used in official handwriting rules for primary school in Russia, Ukraine, Bulgaria, Poland, other Slavic countries,[3] France, Italy, Belgium, Finland,[4] Romania, Germany, Greece,[5] and Hungary.[6][failed verification]

Seven, the fourth prime number, is not only a Mersenne prime (since 23 − 1 = 7) but also a double Mersenne prime since the exponent, 3, is itself a Mersenne prime.[7] It is also a Newman–Shanks–Williams prime,[8] a Woodall prime,[9] a factorial prime,[10] a lucky prime,[11] a happy number (happy prime),[12] a safe prime (the only Mersenne safe prime), and the fourth Heegner number.[13] 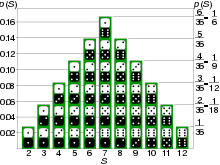 Retrieved from "http://en.turkcewiki.org/w/index.php?title=7&oldid=1034870881"
This website is a mirror of Wikipedia, and is not affiliated with the Wikimedia Foundation.
Categories:
Hidden categories: