Jump to navigation Jump to search
Interstellar comet passing through the Solar System, discovered in 2019

2I/Borisov, originally designated C/2019 Q4 (Borisov),[8] is the first observed interstellar comet and the second observed interstellar interloper after ʻOumuamua.[9][10] 2I/Borisov has a heliocentric orbital eccentricity of 3.36 and is not bound to the Sun.[11] The comet passed through the ecliptic of the Solar System at the end of October 2019, and made its closest approach to the Sun at just over 2 AU on 8 December 2019.[3][12] In November 2019, astronomers from Yale University said that the comet (including coma and tail), was 14 times the size of Earth, and stated, “It’s humbling to realize how small Earth is next to this visitor from another solar system.”[13] In the middle of March, 2020, the comet was observed to fragment;[14] and later, in April, even more evidence of fragmentation was reported.[15][16][17]

The comet is formally called "2I/Borisov" by the International Astronomical Union (IAU), with "2I" or "2I/2019 Q4" being its designation and "Borisov" being its name, but is sometimes referred to as "Comet Borisov", especially in the popular press.[c] As the second observed interstellar interloper after 1I/ʻOumuamua, it was given the "2I" designation, where "I" stands for interstellar.[18][8] The name Borisov follows the tradition of naming comets after their discoverers. Before final designation as 2I/Borisov, the object was referred to by other names: 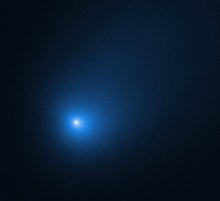 In this observation, the NASA/ESA Hubble Space Telescope revisited the comet shortly after its closest approach to the Sun in December 2019.

Unlike ʻOumuamua, which had an asteroidal appearance, 2I/Borisov's nucleus is surrounded by a coma, a cloud of dust and gas.[21] 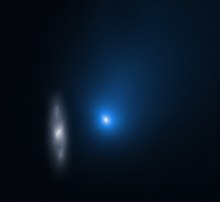 Early estimates of nucleus 2I/Borisov diameter have ranged from 1.4 to 16 km.[24][25] 2I/Borisov has, unlike Solar System comets, noticeably shrunk during Solar System flyby, losing at least 0.4% of its mass before perihelion.[7] Also, the amplitude of non-gravitational acceleration place an upper limit of 0.4 km on nucleus size, consistent with a previous Hubble Space Telescope upper limit of 0.5 km.[6] The comet did not come much closer to Earth than 300 million km, which prevents using radar to directly determine its size and shape. This could be done using the occultation of a star by 2I/Borisov but an occultation would be difficult to predict, requiring a precise determination of its orbit, and the detection would necessitate a network of small telescopes.[26]

A study using observations from Hubble could not find a variation in the light curve. According to this study the rotational period must be larger than 10 hours.[27] A study with CSA's NEOSSat found a period of 13.2 ± 0.2 day, which is unlikely the nuclear spin.[28]

Dave Jewitt and Jane Luu estimate from the size of its coma the comet is producing 2 kg/s of dust and is losing 60 kg/s of water. They extrapolate that it became active in June 2019 when it was between 4 and 5 au from the Sun.[6] A search of image archives found precovery observations of 2I/Borisov as early as 13 December 2018, but not on 21 November 2018, indicating it became active between these dates.[29]

2I/Borisov's composition appears uncommon yet not unseen in Solar System comets, being relatively depleted in water and diatomic carbon (C2) , but enriched in carbon monoxide and amines (NH2).[30] Molar ratio of carbon monoxide to water in 2I/Borisov tail is 35%-105%, resembling unusual blue-tailed comet C/2016 R2 while average for solar system comets is 4%.[31] 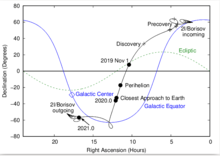 Trajectory across sky in cylindrical cooordinates, with 30 August 2019 discovery position along with precovery positions marked back to 13 December 2018 which help narrow down the incoming trajectory

As seen from Earth, the comet was in the northern sky from September until mid-November. It crossed the ecliptic plane on 26 October near the star Regulus[34], and the celestial equator on 13 November 2019, entering the southern sky. On 8 December 2019, the comet reached perihelion (closest approach to the Sun)[3] and near the inner edge of the asteroid belt.[e] In late December, it made its closest approach to Earth,[35][12] 1.9 au, and had a solar elongation of about 80°.[5] Due to its 44° orbital inclination, 2I/Borisov does not make any notable close approaches to the planets.[3] 2I/Borisov entered the Solar System from the direction of Cassiopeia near the border with Perseus. This direction indicates that it originates from the galactic plane, rather than from the galactic halo.[33][36] It will leave the Solar System in the direction of Telescopium.[33][36] In interstellar space, 2I/Borisov takes roughly 9000 years to travel a light-year relative to the Sun.[f]

) of 32 km/s, much higher than what could be explained by perturbations, which could produce velocities when approaching an infinite distance from the Sun of less than a few km/s.[38] These two parameters are important indicators of 2I/Borisov's interstellar origin.[33][39] For comparison, the Voyager 1 spacecraft, which is leaving the Solar System, is traveling at 16.9 km/s (3.57 au/yr).[40] 2I/Borisov has a much larger eccentricity than ʻOumuamua due to its higher excess velocity and its significantly higher perihelion distance. At this larger distance, the Sun's gravity is less able to alter its path as it passes through the Solar System.[33] 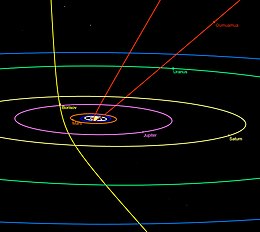 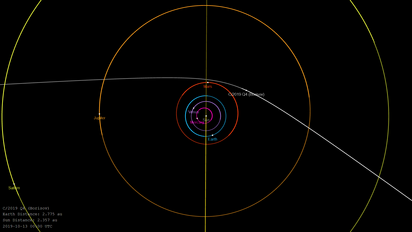 The comet was discovered on 30 August 2019 by amateur astronomer Gennadiy Borisov at his personal observatory MARGO in Nauchnyy, Crimea, using a 0.65-meter telescope he designed and built himself.[42] The discovery has been compared to the discovery of Pluto by Clyde Tombaugh.[43] Tombaugh was also an amateur astronomer who was building his own telescopes, although he discovered Pluto using Lowell Observatory's astrograph. At discovery, it was inbound 3 au from the Sun, 3.7 au from Earth, and had a solar elongation of 38°.[44] Borisov described his discovery thus:[45]

I observed it on August 29, but it was August 30 Greenwich Time.[h] I saw a moving object in the frame, it moved in a direction that was slightly different from that of main asteroids.[i] I measured its coordinates and consulted the Minor Planet Center database. Turned out, it was a new object. Then I measured the near-Earth object rating,[j] it is calculated from various parameters, and it turned out to be 100% – in other words, dangerous. In such cases I must immediately post the parameters to the world webpage for confirmation of dangerous asteroids.[k] I posted it and wrote that the object was diffuse and that it was not an asteroid, but a comet.

2I/Borisov's interstellar origin required a couple of weeks to confirm. Early orbital solutions based on initial observations included the possibility that the comet could be a near-Earth object 1.4 au from the Sun in an elliptical orbit with an orbital period of less than 1 year.[19] Later using 151 observations over 12 days, NASA Jet Propulsion Laboratory's Scout gave an eccentricity range of 2.9–4.5.[46] But with an observation arc of only 12 days, there was still some doubt that it was interstellar because the observations were at a low solar elongation, which could introduce biases in the data such as differential refraction. Using large non-gravitational forces on the highly eccentric orbit, a solution could be generated with an eccentricity of about 1, an Earth minimum orbit intersection distance (MOID) of 0.34 au (51 million km), and a perihelion at 0.90 au around 30 December 2019.[47] However, based on available observations, the orbit could only be parabolic if non-gravitational forces (thrust due to outgassing) affected its orbit more than any previous comets.[48] Eventually with more observations the orbit converged to the hyperbolic solution that indicated an interstellar origin and non-gravitational forces could not explain the motion.[20]

Play media
Hubble started observations of 2I/Borisov in October 2019, two months prior to the comet's closest approach to the Sun

Unless the comet fades or disintegrates unexpectedly, it should be observable until at least September 2020.[20] Observation of 2I/Borisov is aided by the fact that the comet was detected while inbound towards the Solar System. ʻOumuamua had been discovered as it was leaving the system, and thus could only be observed for 80 days before it was out of range. Because of its closest approach occurring near traditional year-end holidays, and the capability to have extended observations, some astronomers have called 2I/Borisov a "Christmas comet".[11][49] Observations using the Hubble Space Telescope began on 12 October, when the comet moved far enough from the Sun to be safely observed by the telescope.[50] Hubble is less affected by the confounding effects of the coma than ground-based telescopes, which will allow it to study the rotational light curve of 2I/Borisov's nucleus. This should facilitate an estimate of its size and shape. The observations will serve as a baseline for possible further observations, as the comet approaches perihelion and then leaves the Solar System.

A preliminary (low-resolution) visible spectrum of 2I/Borisov was similar to typical Oort Cloud comets.[51][52] Its color indexes also resemble the Solar System's long period comets.[6] Emissions at 388 nm indicated the presence of cyanide (formula CN), which is typically the first detected in Solar System comets including comet Halley[53]. This was the first detection of gas emissions from an interstellar object.[54] The non-detection of diatomic carbon has also been reported in October 2019, with the ratio C2 to CN being less than either 0.095[55] or 0.3.[56] The diatomic carbon was positively detected in November 2019, with measured C2 to CN ratio of 0.2±0.1.[57] This resembles a carbon-chain depleted group of comets. These are either Jupiter family comets,[55] or rare blue-colored carbon monoxide comets exemplified by C/2016 R2 comet.[58] By the end of November 2019, C2 production have dramatically increased, and C2 to CN ratio have reached 0.61, along with appearance of bright amine (NH2) bands.[59] Atomic oxygen has also been detected, from this observers estimated an outgassing of water at a rate similar to Solar System comets.[60][61] Initially, neither water nor OH lines were directly detected[62] in September 2019. First unambiguous detection of OH lines was done 1 November 2019, and OH production peaked in early December 2019.[63]

The comet did come within about 2 au of the Sun, a distance at which many small comets have been found to disintegrate. The probability that a comet disintegrates strongly depends on the size of its nucleus; Guzik et al. estimated a probability of 10% that this will happen to 2I/Borisov.[64] Jewitt and Luu compared 2I/Borisov to C/2019 J2, another comet of similar size that disintegrated in May 2019 at a distance of 1.9 au from the Sun.[65][6] In the event that the nucleus disintegrates, as is sometimes seen with small comets, Hubble can be used to study the evolution of the disintegration process.[66][6]

The severe outburst in February-March 2020, led to suspected "ongoing nucleus fragmentation" from the comet by March 12.[14] Indeed, images from the Hubble Space Telescope taken on March 30, 2020 show a non-stellar core indicating that Comet 2I/Borisov has ejected sunward a large fragment.[15][16][67] The ejection is estimated to have begun around March 7,[68] and may have occurred during one of the outbursts that occurred near that time.[69]. The ejected fragment appeared to have vanished by 6 April 2020.[70]

A followup study, reported on 6 April 2020, observed only a single object, and noted that the fragment component had now disappeared.[70][17] Later analysis of the event showed the ejected dust and fragments have a combined mass of about 0.1% of total mass of nucleus, making event a large outburst rather than fragmentation.[71]

The higher hyperbolic excess velocity of 2I/Borisov of 32 km/s makes it even harder to reach for a spacecraft than 1I/'Oumuamua (26 km/s).[dubious – discuss] According to a team of the Initiative for Interstellar Studies, a two-ton spacecraft could theoretically have been sent in July 2018 to intercept 2I/Borisov using a Falcon Heavy-class launcher, but only if the object had been discovered much earlier than it was. Launches after the actual discovery date would require a significantly larger launcher such as the Space Launch System (SLS) and Oberth manoeuvres near Jupiter and near the Sun. By September 2019, even an SLS-class launcher would only be able to deliver a 3 kg (6.6 lb) payload (such as a CubeSat) into a trajectory that could intercept 2I/Borisov in 2045 at a relative speed of 34 km/s.[72] According to congressional testimony, NASA may need at least five years of preparation to launch such an intercepting mission.[73]

Retrieved from "http://en.turkcewiki.org/w/index.php?title=2I/Borisov&oldid=970036486"
This website is a mirror of Wikipedia, and is not affiliated with the Wikimedia Foundation.
Categories:
Hidden categories: