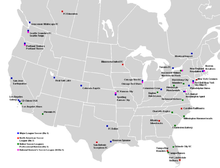 The professional soccer clubs of the United States and Canada for 2013.

The 2013 season is the 101st season of competitive soccer in the United States.

The New York Cosmos will join the league during the Fall season.[6] Puerto Rico Islanders, originally planned to take part in this season, announced taking one year off due to restructuring.[7]

On January 23, 2013, USL Pro announced an alliance with Major League Soccer. For the 2013 season, four MLS teams will affiliate with USL Pro teams in lieu of participating in the MLS Reserve League system. These MLS clubs will loan at least four of their reserve players to their USL Pro affiliate club for development purposes.

All USL Pro teams will play two matches each with the remaining MLS Reserve League teams. Those matches will count toward USL Pro standings, giving each team a total of 26 games.[11]

The following teams will affiliate:

USL Pro teams will play MLS Reserve teams as listed below. Except for Antigua Barracuda FC (who will play two MLS reserve teams on the road), each set will be a home-and-away arrangement.

The USL Pro season will begin on March 23, 2013. The first matches with MLS Reserve League teams will take place on April 7, 2013.

The 100th edition of the annual national championship, the 2013 Lamar Hunt U.S. Open Cup, ran from May 7 through October 2. Sporting Kansas City, the defending champions, were eliminated in the fourth round (round of 16) by USL Pro side Orlando City.

Retrieved from "http://en.turkcewiki.org/w/index.php?title=2013_in_American_soccer&oldid=949035749"
This website is a mirror of Wikipedia, and is not affiliated with the Wikimedia Foundation.
Categories:
Hidden categories: