10 Items or Less is a 2006 American comedy-drama film written and directed by Brad Silberling and starring Morgan Freeman and Paz Vega. Shot in fifteen days,[2] 10 Items or Less made its release as a digital download – the first such release via the Internet – while it was still in theaters.[2]

ClickStar, founded by Morgan Freeman and Lori McCreary, made the film available digitally on December 15, 2006, fourteen days after it made its theatrical debut. This event was highlighted by the American Film Institute in their AFI Awards 2006 "Moments of Significance".[3]

Through circumstance, two strangers, an actor (Freeman) preparing for an upcoming role and a cashier (Vega), drive around Los Angeles together, having a number of conversations about life and exploring the differences and similarities between their worlds.

Revelation Entertainment produced the film, and Morgan Freeman served as executive producer.[5] The film was shot entirely in Carson and Brentwood.[6] 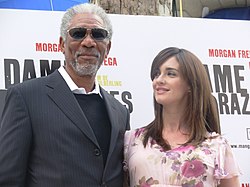 Freeman and Vega presenting the film in Madrid, Spain

According to Jonathan Rosenbaum of the Chicago Reader, the film is "A friendly demonstration of how two actors with charisma and a relaxed writer-director (Brad Silberling) can make a nice movie for practically nothing." In contrast, Desson Thomson, of The Washington Post, believes that the film is "a natural but failed experiment about a pleasant encounter in the style of independent films".[8]

Critical reaction to the film was mixed, with general praise for the work of the two main actors. The film has had a 63% approval rating based on 59 reviews collected by Rotten Tomatoes.[9]

The film was named one of the "Top Independent Films of 2006" by the National Board of Review.[10]

The DVD was released in the U.S. on April 24, 2007.[11] It includes commentary by Silberling, a featurette on 'the making of',[11] 6 deleted scenes, and 3 promotional shorts.[citation needed]

Although a soundtrack was not officially released, the following songs were included in the film:[12]

Retrieved from "http://en.turkcewiki.org/w/index.php?title=10_Items_or_Less_(film)&oldid=959427289"
This website is a mirror of Wikipedia, and is not affiliated with the Wikimedia Foundation.
Categories:
Hidden categories: