4 (four) is a number, numeral, and glyph. It is the natural number following 3 and preceding 5. It is the smallest composite number, and is considered unlucky in many East Asian cultures.

Four is the smallest composite number, its proper divisors being 1 and 2.[1]

4 is the smallest squared prime (p2) and the only even number in this form. 4 is also the only square one more than a prime number.

A four-sided plane figure is a quadrilateral (quadrangle) which include kites, rhombi, rectangles and squares, sometimes also called a tetragon. A circle divided by 4 makes right angles and four quadrants. Because of it, four (4) is the base number of the plane (mathematics). The duodecimal system, and the vigesimal system are based on four.

A solid figure with four faces as well as four vertices is a tetrahedron,[4] and 4 is the smallest possible number of faces (as well as vertices) of a polyhedron.[5] The regular tetrahedron is the simplest Platonic solid.[6] A tetrahedron, which can also be called a 3-simplex, has four triangular faces and four vertices. It is the only self-dual regular polyhedron.[7]

Four-dimensional differential manifolds have some unique properties. There is only one differential structure on ℝn except when n = 4, in which case there are uncountably many.

The smallest non-cyclic group has four elements; it is the Klein four-group.[8] Four is also the order of the smallest non-trivial groups that are not simple.

Four is the only integer n for which the (non trivial) alternating group An is not simple.

Four is the maximum number of dimensions of a real associative division algebra (the quaternions), by a theorem of Ferdinand Georg Frobenius.

The four-color theorem states that a planar graph (or, equivalently, a flat map of two-dimensional regions such as countries) can be colored using four colors, so that adjacent vertices (or regions) are always different colors.[9] Three colors are not, in general, sufficient to guarantee this.[10] The largest planar complete graph has four vertices.[11]

Four is the highest degree general polynomial equation for which there is a solution in radicals.[14] 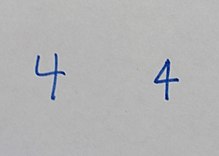 Representing 1, 2 and 3 in as many lines as the number represented worked well.[citation needed] The Brahmin Indians simplified 4 by joining its four lines into a cross that looks like the modern plus sign. The Shunga would add a horizontal line on top of the numeral, and the Kshatrapa and Pallava evolved the numeral to a point where the speed of writing was a secondary concern. The Arabs' 4 still had the early concept of the cross, but for the sake of efficiency, was made in one stroke by connecting the "western" end to the "northern" end; the "eastern" end was finished off with a curve. The Europeans dropped the finishing curve and gradually made the numeral less cursive, ending up with a glyph very close to the original Brahmin cross.[15]

While the shape of the 4 character has an ascender in most modern typefaces, in typefaces with text figures the character usually has a descender, as, for example, in

On the seven-segment displays of pocket calculators and digital watches, as well as certain optical character recognition fonts, 4 is seen with an open top.[16]

Television stations that operate on channel 4 have occasionally made use of another variation of the "open 4", with the open portion being on the side, rather than the top. This version resembles the Canadian Aboriginal syllabics letter ᔦ. The magnetic ink character recognition "CMC-7" font also uses this variety of "4".[17]

In logic and philosophy

4 as a resin identification code, used in recycling.

Retrieved from "http://en.turkcewiki.org/w/index.php?title=4&oldid=970585921"
This website is a mirror of Wikipedia, and is not affiliated with the Wikimedia Foundation.
Categories:
Hidden categories: