(Redirected from А)
Jump to navigation Jump to search 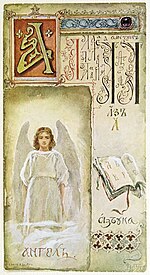 А (А а; А а) is a letter of the Cyrillic script. It commonly represents an open central unrounded vowel /ä/, halfway between the pronunciation of ⟨a⟩ in "cat" and "father". The Cyrillic letter А is romanized using the Latin letter A.

Through history the Cyrillic letter А has had various shapes, but today is standardised on one that looks exactly like the Latin letter A, including the italic and lower case forms.

Retrieved from "http://en.turkcewiki.org/w/index.php?title=A_(Cyrillic)&oldid=972168234"
This website is a mirror of Wikipedia, and is not affiliated with the Wikimedia Foundation.
Categories:
Hidden categories: