Î, î (i-circumflex) is a letter in the Friulian, Kurdish, Old Malay and Romanian alphabets. This letter also appears in French, Turkish, Italian, Welsh and Walloon languages as a variant of letter “i”.

In Afrikaans, î is a punctuated form of i: wîe, the plural of wig ('wedge'). 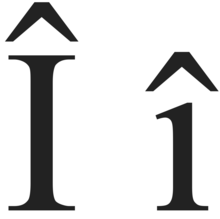 Î is a letter which appears in several French words, like naître (to be born), abîme (abyss), maître (master), (crème) fraîche and more. Unlike Â, Ê, and Ô, the circumflex does not alter the pronunciation of î or û.

The circumflex usually denotes the exclusion of a letter (usually an s) that was in a prior version of the word:

Î is used to get a longer value of I, becoming /iː/. It can be found for example in all verbs of the fourth conjugation: pandî /paɳ'diː/, (to revel). Another use of Î (and also the other long vowels), is dued to Latin derivation. Instead of preserving the last vowel, in Friulian it was used to give a longer value to the penultimate vowel, ending the word with a consonant: gliru(m) < glîr, (dormouse), where the ending u disappeared.

In Italian the circumflex accent is an optional accent. While the accent itself has many uses, with the letter "i" it is only used while forming the plural of male nouns ending in -io in order to minimize both ambiguity and the stressing of the wrong syllable: principio /prinˈtʃipjo/ (principle) has the plural principî /prinˈtʃipi/, and principe /ˈprintʃipe/ (prince) has principi /ˈprintʃipi/ as plural. In this situation it can be replaced with a double "i" (E.g "principii" ), with an i followed by a j (E.g "principij"), with a single j (E.g "principj") or, more simply, with a single "i" (E.g "principi"). In contemporary usage is utilized mostly the single "i" while the other variants are seen as archaic and overly formal.

Î is the 12th letter of the Kurdish alphabet and represents /iː/: Kurdî ([ˈkuɾdiː], 'Kurdish language').

Î is the 12th letter of the Romanian alphabet and denotes /ɨ/. This sound is also represented in Romanian as letter â. The difference is that â is used in the middle of a word, as in România, but î is used at the beginning or the end of a word: înțelegere (understanding), a urî (to hate). A compound word starting with the letter î retains it, even if it is in the middle of the word: neînțelegere (misunderstanding). However, if a suffix is added, the î changes into â, as in the example: a urî (to hate), urât (hated).

In Turkish, î can indicate the /iː/ sound in Arabic loanwords where it is used as an adjectival suffix that makes an adjective from a noun: askerî (military), millî (national), dâhilî (internal) etc.

In Welsh, î is used to represent long stressed i [iː] when, without the circumflex, the vowel would be pronounced as short [ɪ] (dîm [diːm], the mutated form of "team"), as opposed to dim [dɪm] "no, nought, nothing".

Retrieved from "http://en.turkcewiki.org/w/index.php?title=Î&oldid=959851738"
This website is a mirror of Wikipedia, and is not affiliated with the Wikimedia Foundation.
Categories:
Hidden categories: