Æ in Helvetica and Bodoni

Æ (minuscule: æ) is a grapheme named æsc or ash, formed from the letters a and e, originally a ligature representing the Latin diphthong ae. It has been promoted to the full status of a letter in the alphabets of some languages, including Danish, Norwegian, Icelandic, and Faroese. As a letter of the Old English Latin alphabet, it was called æsc ("ash tree")[1] after the Anglo-Saxon futhorc rune ᚫ (

) which it transliterated; its traditional name in English is still ash /æʃ/. It was also used in Old Swedish before being changed to ä. Today, the International Phonetic Alphabet uses it to represent a short "a" sound (as in "cat"). Variants include Ǣ ǣ Ǽ ǽ æ̀.

Æ alone and in context 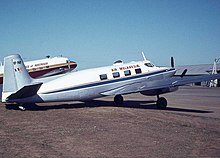 Vanuatu's domestic airline operated under the name Air Melanesiæ in the 1970s.

In Classical Latin, the combination AE denotes the diphthong [ae̯], which had a value similar to the long i in fine as pronounced in most dialects of Modern English.[2] Both classical and present practice is to write the letters separately, but the ligature was used in medieval and early modern writings, in part because æ was reduced to the simple vowel [e] during the Roman Empire. In some medieval scripts, the ligature was simplified to ę, an e with ogonek, the e caudata. That was further simplified into a plain e, which may have influenced or been influenced by the pronunciation change. However, the ligature is still relatively common in liturgical books and musical scores.

In the modern French alphabet, æ is used to spell Latin and Greek borrowings like tænia and ex æquo. It was mentioned in Serge Gainsbourg's song Elaeudanla Téïtéïa (e.g. "L, A, E dans l'A, T, I, T, I, A"), which is the spelling in French of the name Lætitia.[citation needed] 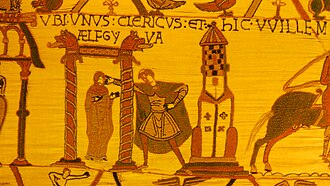 The name Ælfgyva, on the Bayeux Tapestry.

In English, usage of the ligature varies between different places and contexts, but it is fairly rare. In modern typography, if technological limitations make the use of æ difficult (such as in use of typewriters, telegraphs, or ASCII), the digraph ae is often used instead.

In the United States, the issue of the ligature is sidestepped in many cases by use of a simplified spelling with "e", as happened with œ as well. Usage, however, may vary; for example, medieval is now more common than mediaeval (and the now old-fashioned mediæval) even in the United Kingdom,[3] but archaeology is preferred over archeology, even in the US.[4]

Given their long history, ligatures are sometimes used to show archaism or in literal quotations of historic sources; for instance, in those contexts, words such as dæmon and æther are often so spelled.

The ligature is seen on gravestones of the 19th century, short for ætate ("at the age (of)"): "Æ xxYs, yyMs, zzDs." It is also common[citation needed] in formal typography (invitations, resolutions, announcements and some government documents).

In Old English, æ represented a sound between a and e (/æ/), very much like the short a of cat in many dialects of Modern English. If long vowels are distinguished from short vowels, the long version /æː/ is marked with a macron (ǣ) or, less commonly, an acute (ǽ).

In Old Norse, æ represents the long vowel /ɛː/. The short version of the same vowel, /ɛ/, if it is distinguished from /e/, is written as ę.

In most varieties of Faroese, æ is pronounced as follows:

One of its etymological origins is Old Norse é (the other is Old Norse æ), which is particularly evident in the dialects of Suðuroy, where Æ is [eː] or [ɛ]:

In Icelandic, æ represents the diphthong [ai], which can be long or short.

In Danish and Norwegian, æ is a separate letter of the alphabet that represents a monophthong. It follows z and precedes ø and å. In Norwegian, there are four ways of pronouncing the letter: 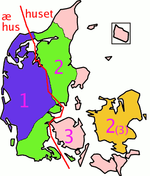 West of the red line, classic Danish dialects use æ as the definite article.

In many western, northern and southwestern Norwegian dialects and in the western Danish dialects of Thy and Southern Jutland, æ has a significant meaning: the first person singular pronoun I.[citation needed] It is thus a normal spoken word and is usually written æ when such dialects are rendered in writing.

The equivalent letter in German and Swedish is ä, but it is not located at the same place within the alphabet. In German, it is not a separate letter from "A" but in Swedish, it is the second-last letter (between å and ö).

In the normalised spelling of Middle High German, æ represents a long vowel [ɛː]. The actual spelling in the manuscripts varies, however. 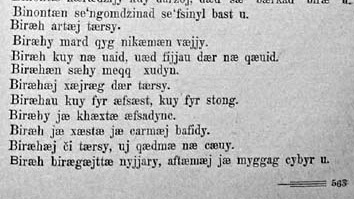 Ossetic Latin script; part of a page from a book published in 1935

Ossetic used the letter æ when it was written using the Latin script from 1923 to 1938. Since then, Ossetian has used a Cyrillic alphabet with an identical-looking letter (Ӕ and ӕ). It is pronounced as a mid-central vowel (schwa).

The letter æ is used in the official orthography of Kawésqar spoken in Chile and also in that of the Fuegian language Yaghan.

The symbol [æ] is also used in the International Phonetic Alphabet to denote a near-open front unrounded vowel like in the word cat in many dialects of Modern English, which is the sound that was most likely represented by the Old English letter. In the IPA, it is always in lowercase. 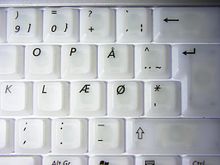 Danish keyboard with keys for Æ, Ø and Å.
On Norwegian keyboards the Æ and Ø trade places. 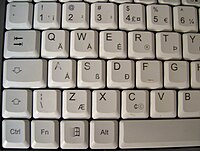 The Æ character (among others, including Å and ø) is accessible using AltGr+z on a US-International keyboard

The Latin letters are frequently used in place of the Cyrillic Ӕ and ӕ in Cyrillic texts (such as on Ossetian sites on the Internet).

Retrieved from "http://en.turkcewiki.org/w/index.php?title=Æ&oldid=940907513"
This website is a mirror of Wikipedia, and is not affiliated with the Wikimedia Foundation.
Categories:
Hidden categories: