(Redirected from £)
Jump to navigation Jump to search
This article is about the currency symbols "£" and "₤". For the sign "#", see Number sign. For the sign "lb", see pound (mass). 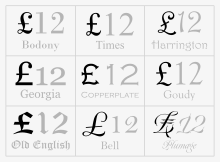 The £ glyph in a selection of fonts

The pound sign (£) is the symbol for the pound sterling – the currency of the United Kingdom and previously of Great Britain and of the Kingdom of England. The same symbol is used for other currencies called pound, such as the Gibraltar pound, the Egyptian pound, and the Syrian pound. A similar symbol (₤) was used on some banknotes from time to time but the Bank of England has not done so since 1975. (This two-bar symbol is also used for currencies named lira, for example the (withdrawn) Italian lira).

The symbol derives from a capital "L", representing libra pondo, the basic unit of weight in the Roman Empire, which in turn is derived from the Latin word, libra, meaning scales or a balance. The pound became an English unit of weight and in England became defined as the tower pound (equivalent to 350 grams) of sterling silver.[1][2] According to the Royal Mint Museum:

It is not known for certain when the horizontal line or lines, which indicate an abbreviation, first came to be drawn through the L. However, there is in the Bank of England Museum a cheque dated 7 January 1661 with a clearly discernible £ sign. By the time the Bank was founded in 1694 the £ sign was in common use.[3]

However, the simple letter L, in lower- or uppercase, was used to represent the pound sterling in printed books and newspapers until well into the 19th century.[4] In the blackletter type used until the seventeenth century,[5] the letter L is rendered as

The pound sign is placed before the number (e.g. "£12,000") and separated from the following digits by no space or only a thin space.

In American English, the term "pound sign" usually refers to the symbol #, and the corresponding telephone key is called the "pound key".[6] In Canadian English the symbols £ and # are both called the pound sign, but the # is also known as the "number sign" and the "noughts-and-crosses board".[a][7]

Banknotes issued by the Bank of England since 1975 have only used the single bar style as a pound sign.[8][9] The Bank used both the two-bar style (₤) and the one-bar style (£) (and sometimes a figure without any symbol whatever) more or less equally since 1725 until 1971, intermittently and sometimes concurrently.[8] In typography, the symbols are allographs – style choices – when used to represent the pound and both use the same POUND SIGN Unicode code point, (not LIRA SIGN despite its looking the same).

In the eighteenth-century Caslon metal fonts, the pound sign was identical to the italic capital "J" rotated 180 degrees.[10]

Currencies that use the pound sign[edit]

In the Unicode standard, the symbol £ is called POUND SIGN and the symbol ₤ is the LIRA SIGN. These have respective code points:

U+20A4 ₤ LIRA SIGN (HTML &#8356;)[12] Unicode notes that the "lira sign" is not widely used and was added due to both it and the pound sign being available on HP printers, and also states that the preferred sign for lira is the pound sign.[13]

The encoding of the £ symbol in position xA3 was first standardised by ISO Latin-1 in 1985. Position xA3 was used by the Digital Equipment Corporation VT220 terminal, Mac OS Roman, the Amstrad CPC, the Commodore Amiga and the Acorn Archimedes.

Many early computers (limited to a 7-bit, 128-position character set) used a variant of ASCII with one of the less-frequently used characters replaced by the £. The UK national variant of ISO 646 was standardised as BS 4730 in 1985. This code was identical to ASCII except for two characters: x23 encoded "£" instead of "#", while x7E encoded "‾" instead of "~". MSDOS on the IBM PC originally used a non-standard 8-bit character set Code page 437 in which the £ symbol was encoded as x9C; adoption of ISO character codes only came later with Microsoft Windows. The Atari ST also used position x9C. The HP Laserjet used position xBA for the £ symbol, while most other printers used x9C. The BBC Ceefax system which dated from 1976 encoded the £ as x23. The ZX Spectrum and the BBC Micro used x60 ("`"). The Commodore 64 used x5C ("\") while the Oric used x5F ("_"). IBM's EBCDIC code page 037 uses xB1 for the £ while its code page 285 uses x5B. ICL's 1900-series mainframes used a six-bit (64-position character set) encoding for characters, loosely based on BS 4730, with the £ symbol represented as octal 23 (hex 13).

Typewriters produced for the British market included a "£" sign from the earliest days, though its position varied widely. A 1921 advertisement for an Imperial Typewriters model D, for example[14] shows a machine with two modifier shifts (CAPS and FIG), with the "£" sign occupying the FIG shift position on the key for letter "B". But the advertisement notes that "We make special keyboards containing symbols, fractions, signs, etc., for the peculiar needs of Engineers, Builders, Architects, Chemists, Scientists, etc., or any staple trade."

On Latin-alphabet typewriters lacking a "£" symbol type element, a reasonable approximation could be made by typing an "f" over an "L".

The compose key sequence is:[15]

On Microsoft Windows, Linux and Unix, the UK keyboard layout has the "£" symbol on the 3 number key and is typed using:

On a US-International keyboard in Windows,[16] the "£" can be entered using:

On a US-International keyboard in Linux and Unix, the "£" can be entered using:

In Windows, it can also be generated through the Alt keycodes, although the results vary depending on factors such as the locale, codepage and OS version:

The Character Map utility and Microsoft Word's Insert Symbol commands may also be used to enter this character.[b]

The symbol "£" is in the MacRoman character set and can be generated on most non-UK Mac OS keyboard layouts which do not have a dedicated key for it, typically through:

On UK Apple Mac keyboards, this is reversed, with the "£" symbol on the number 3 key, typed using:

Press and hold the local currency sign ($ for US/Canada users, € sign for EU users, etc): a popup box presenting an array of currency signs is presented from which the £ may be chosen.[17]

The logo of the UK Independence Party, a British political party, is based on the pound sign,[18] symbolising the party's opposition to adoption of the euro and to the European Union generally.

A symbol that appears to be a double-barred pound sign is used as the logo of the British record label Parlophone. In fact this is a stylised version of a blackletter L (

The pound sign was used as an uppercase letter (the lowercase being ſ) signifying [ʒ] in the early 1993–1995 version of the Turkmen Latin alphabet.[19]

Retrieved from "http://en.turkcewiki.org/w/index.php?title=Pound_sign&oldid=935124060"
This website is a mirror of Wikipedia, and is not affiliated with the Wikimedia Foundation.
Categories:
Hidden categories: